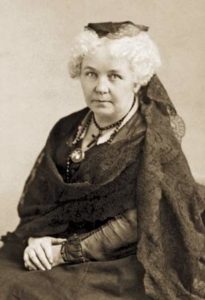 Rite I:
O God, whose Spirit guideth us into all truth and maketh us free: Strengthen and sustain us as thou didst thy servants Elizabeth, Amelia, Sojourner, and Harriet. Give us vision and courage to stand against oppression and injustice and all that worketh against the glorious liberty to which thou callest all thy children; through Jesus Christ our Savior, who liveth and reigneth with thee and the Holy Spirit, one God, for ever and ever. Amen.

Rite II:
O God, whose Spirit guides us into all truth and makes us free: Strengthen and sustain us as you did your servants Elizabeth, Amelia, Sojourner, and Harriet. Give us vision and courage to stand against oppression and injustice and all that works against the glorious liberty to which you call all your children; through Jesus Christ our Savior, who lives and reigns with you and the Holy Spirit, one God, for ever and ever. Amen.

50Then Abimelech went to Thebez, and encamped against Thebez, and took it. 51But there was a strong tower within the city, and all the men and women and all the lords of the city fled to it and shut themselves in; and they went to the roof of the tower. 52Abimelech came to the tower, and fought against it, and came near to the entrance of the tower to burn it with fire. 53But a certain woman threw an upper millstone on Abimelech’s head, and crushed his skull. 54Immediately he called to the young man who carried his armour and said to him, ‘Draw your sword and kill me, so people will not say about me, “A woman killed him.” ’ So the young man thrust him through, and he died. 55When the Israelites saw that Abimelech was dead, they all went home.

1 Hallelujah!
Praise the Lord, O my soul! *
I will praise the Lord as long as I live;
I will sing praises to my God while I have my being.
2 Put not your trust in rulers, nor in any child of earth, *
for there is no help in them.
3 When they breathe their last, they return to earth, *
and in that day their thoughts perish.
4 Happy are they who have the God of Jacob for their help! W*
whose hope is in the Lord their God;
5 Who made heaven and earth, the seas, and all that is in them; *
who keeps his promise for ever;
6 Who gives justice to those who are oppressed, *
and food to those who hunger.
7 The Lord sets the prisoners free;
the Lord opens the eyes of the blind; *
the Lord lifts up those who are bowed down;
8 The Lord loves the righteous;
the Lord cares for the stranger; *
he sustains the orphan and widow,
but frustrates the way of the wicked.
9 The Lord shall reign for ever, *
your God, O Zion, throughout all generations.
Hallelujah!

5 And he said to them, ‘Suppose one of you has a friend, and you go to him at midnight and say to him, “Friend, lend me three loaves of bread; 6for a friend of mine has arrived, and I have nothing to set before him.” 7And he answers from within, “Do not bother me; the door has already been locked, and my children are with me in bed; I cannot get up and give you anything.” 8I tell you, even though he will not get up and give him anything because he is his friend, at least because of his persistence he will get up and give him whatever he needs.