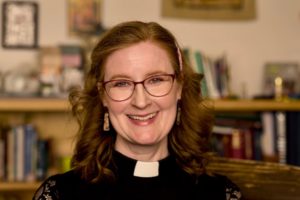 The Rev. Danae M. Ashley is an Episcopal priest and marriage and family therapist who has ministered with parishes in North Carolina, New York, and Minnesota. She serves as the associate rector at St. Andrew’s Episcopal Church, Seattle, and a therapist at Soul Spa Seattle. Danae uses art, music, drama, poetry, and movement in counseling, spiritual direction, and creation of ritual.

Danae has written for Working Preacher, Luther Seminary’s Faith+Lead, Episcopal Café, and Sermons That Work, as well as being a contributor to podcasts, books, and a play about fertility struggle. Her favorite pastimes include reading, traveling, tending Alvie’s Memorial Garden, delighting in their adopted pit bull Sophie Grace’s snuggles, dancing with wild abandon to Celtic music, and serious karaoke.

In North Carolina, there is a parish called the Episcopal Church of the Holy Communion: the Churches of the Frescoes. The parish has two worship spaces: St. Mary’s in West […]

Have you ever heard the saying, “It’s not what you know, it’s who you know”? Networking has been an established social function in society for as long as there have […]