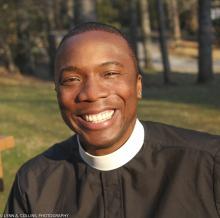 A priest, a parent, and a (recovering) perfectionist, Deon K. Johnson is a native of Barbados who has questioned Michigan winters in his twelve years as rector of St. Paul’s Episcopal Church in Brighton, Mich.

Deon’s passion for inclusion, welcome, and worship geekiness has led him to be trained as a Liturgical Consultant, helping communities of faith re-envision their worship and worship spaces to better reflect the beauty, mystery, and all-around awesomeness of following Jesus.

Deon graduated from Case Western Reserve University and the General Theological Seminary. When he isn’t ruing temperatures below fifty degrees, Deon enjoys traveling, biking, hiking, photography and spending time with his family. Deon is married to Jhovanny Osorio-Vazquez and both are foster parents.

The Episcopal Diocese of Missouri elected the Rev. Deon Kevin Johnson as its 11th diocesan bishop on Nov. 23, 2019, at Christ Church Cathedral in St. Louis.

It had been a busy week. We finally made it to Jerusalem with Jesus, and not a moment too soon. The city was crowded! It was the week of the […]

In the fifteenth year of the reign of Emperor Tiberius, when Pontius Pilate was governor of Judea, and Herod was ruler of Galilee, and his brother Philip ruler of the […]

In those days Jesus came from Nazareth of Galilee and was baptized by John in the Jordan. And just as he was coming up out of the water, he saw […]

The disciples were afraid! Their world had come to an abrupt end on a Friday afternoon as their teacher, leader, and friend had died in shame outside the city walls. […]

Nothing Changes Except Everything, Christmas Day (I) – 2016

Nothing changed. God had broken into our world with sound and beauty. Light and hope pierced the dark of gloom and nothing changed. The prophets of old had spoken of […]

There is a wonderful scene in C.S. Lewis’s famous novel The Lion, the Witch and the Wardrobe where Lucy, the youngest the children to cross into the magical world of Narnia, converses […]

Early on the first day of the week, while it was still dark…things happen early in the morning. Mornings are mystical and sacred, the earth rises from its slumber to […]

Bartimaeus son of Timaeus was a nobody. He wasn’t just any nobody he was a nobody among the nobodies. People often walked past Bartimaeus and at best they thought of […]