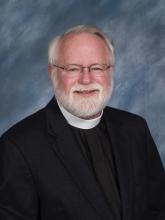 Today is the Sunday after the Ascension; and this year we hear Luke tell the story of the risen Lord’s departure from his disciples. The Ascension is probably not the best known of the feast days on the calendar, but it is one that takes on increasing depth and importance the more you think about […]

“Whose wife will the woman be?” Isn’t that a great question? The Sadducees were the oldest and most conservative of the major religious groups of Jesus’ day. One of their big disagreements with the Pharisees and other groups was over the fairly new notion that there would be a personal resurrection after death. The Sadducees […]

The first temptation most everyone who hears this parable faces is the temptation to do theological dentistry. That is, to try to pull the teeth of the parable. That’s usually done by saying that we are not like that rich man and we don’t act like he acted. Then we say that the real point […]

There is a delightful book called Tales From a Magic Monastery, by Theophane the Monk, (Crossroad, New York, 1981), that you might enjoy reading some day. It’s a collection of stories set in a very special monastery “off over there somewhere” — a place where the truth is always acted out. This is what happened […]

Today we hear about Mary and Martha — two really remarkable people who have often been treated rather badly. To be sure, they are famous and, if nothing else, doubtless have had more women’s guilds named after them than anyone else. But they are so often used as types, as symbols, that their own story […]

The story of the wedding at Cana of Galilee has been read in Epiphany for a very long time. That’s because the theme of Epiphany is the manifestation, the showing off to the world, of Jesus-of who he is, of what he is about. The business of changing water into wine was the first of […]

Several Years Ago…, The Transfiguration – 2000

Several years ago, one of the Public Opinion companies, it was probably Gallup, did a survey of Americans and asked a very interesting question. They asked several thousand people whether they had ever had what they would call “a religious experience,” a personal experience of whatever sort, that brought them somehow into the presence of […]

For about 1,000 years, this Sunday, the Sunday in the middle of Lent, has been a little special. Because of the Gospel account of the miraculous feeding, today has been known as Refreshment (or, in Latin, Laetare) Sunday. In the Middle Ages, the penitential disciplines of Lent were relaxed somewhat, there were some provisions for […]