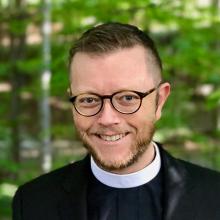 You might be tempted to gloss over the miracle stories about Jesus that are recorded in the Gospels. Taken at face value, most of them stretch our credulity, perhaps further […]

How did this happen? How did Jesus’ life of peace end in such a violent death? We stand at the edge of this moment, looking on in horror and confusion […]

We should be observing the Ninth Sunday after Pentecost today, but this year, there is a break in the pattern. Today is the Feast of the Transfiguration, which always falls […]

Today is January 22nd and we are just about three weeks into 2017. Did you make any resolutions this year? If you did, how are they holding up? New Year’s resolutions […]

In June 2010, Bill Gates and Warren Buffett announced a new charity initiative for billionaires: the Giving Pledge. So far, Gates and Buffett have received pledges from 137 billionaires from […]

John’s Gospel ends with four appearances that the resurrected Jesus makes to different groups of disciples: four scenes of Christ revealed alive, four assurances that death could never contain the […]

On the third day, there was a wedding in Cana of Galilee. How many weddings have you been to in your life? Can you remember what all those brides wore, […]