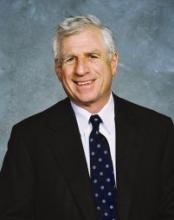 In 2004, Danforth represented the United States as U.S. Ambassador to the United Nations where he focused on ending the North/South civil war in Sudan, a 20 year conflict that killed two million people and displaced five million others. A peace agreement between the two sides was ultimately signed in Nairobi, Kenya on January 9, 2005.

Danforth represented the State of Missouri in the United States Senate for 18 years, retiring in 1994. Currently, Danforth is Chairman of the Danforth Foundation, a philanthropic organization focused on strengthening the St. Louis metropolitan area.

Danforth and his wife, the former Sally Dobson of St. Louis, live in St. Louis County. They have five children and thirteen grandchildren.

No sermons or bible studies!