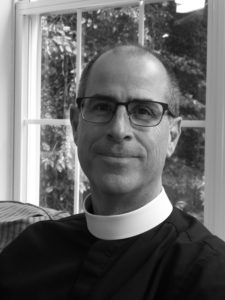 The Rev. Joseph S. Pagano is an Episcopal priest who serves in the Anglican Parish of Pasadena and Cormack in Newfoundland, Canada. He is a faculty member in theology at Queen’s College in St. John’s, Newfoundland. His most recent book is Common Prayer: Reflections on Episcopal Worship.

Is there anything quite as wonderful as the smell of freshly baked bread? The ingredients are so simple – yeast, flour, eggs, butter, water, salt – but the smell when it comes out of the oven is heavenly. And what could be better than eating fresh hot bread? Slice open a loaf that is still […]

Today we celebrate the Nativity of Saint John the Baptist. John the Baptist was many things. He was a first-century apocalyptic Jew. He was the last of the Old Testament prophets. He was the forerunner of Christ. But today, on his feast day, let’s think of John as a spiritual massage therapist. An Episcopal priest […]

Martin Luther once said, “That upon which you set your heart and put your trust is properly your god.” Luther was talking about what it means to have a god. He says, “A god means that from which we expect all good and to which we are to take refuge in all distress, so that […]

Names can tell us a lot about people’s characters and the roles they play in a story. One of the pleasures of reading literature is discovering the meaning of characters’ names. Authors will often give their characters names that tell us something important about who they are and about what they will do in the […]

We are all searching for something or someone. Not just the small things, like our house keys or a parking space, but also bigger things, deeper things, people, places, and relationships that we hope will fulfill us, bring us joy, grant us peace. Many people are searching for a job, but also more than a […]

Today’s gospel lesson is part of Jesus’ teaching about our life together in community, how it is that we are to live and love within the Christian community, especially when things go wrong. And because we are talking about human beings living in community, we can be fairly sure that things will go wrong. Our […]

When we want to talk about something or someone we know truly or deeply, we often resort to the language of the heart. Helen Keller said, “The best and most beautiful things in the world cannot be seen or even touched. They must be felt with the heart.” In Measure for Measure, Shakespeare wrote, “Go […]

In T. S. Eliot’s poem, “The Four Quartets,” he talks about going to a church at Little Gidding, the site of a small Anglican religious community founded in the seventeenth century. Eliot writes, “You are not here to verify, instruct yourself, or inform curiosity or carry report. You are here to kneel where prayer has […]

We are in many ways a weary people. Literally and figuratively, we are tired. A survey conducted by the National Sleep Foundation found that 47 million American adults suffer from sleep deprivation. Thatâs almost a quarter of the adult population in America. Thatâs a lot of weary people. And it is a serious problem. Fatigue […]

The Grammy-award-winning singer Mary Chapin Carpenter recently suffered a pulmonary embolism. She was admitted to an emergency room after experiencing terrible chest pain. A scan revealed blood clots in her lungs. People told her that she should feel lucky because a pulmonary embolism can be fatal. But instead of feeling lucky, she fell into a […]