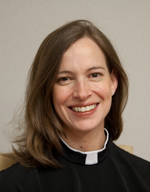 The Rev. Joslyn Ogden Schaefer serves as the Rector of Grace Church in the Mountains, in Waynesville, NC. She has degrees from Davidson College, University of Edinburgh and Episcopal Divinity School. In this phase of life, most of her discretionary time is lovingly devoured by small children. Her two primary spiritual disciplines are child-rearing and sermon-writing, and she is regularly humbled by both.

[RCL] Exodus 20:1-17; Psalm 19; 1 Corinthians 1:18-25; John 2:13-22 A few years ago, the abbreviation “SBNR” popped up in church and cultural circles, naming an emerging phenomenon showing up in countless national surveys. SBNR stands for Spiritual, But Not Religious. SBNRs are present in every cohort surveyed, but their prevalence increases with every new […]

[RCL]: Genesis 21:8-21; Psalm 86:1-10, 16-17; Romans 6:1b-11; Matthew 10:24-39 In today’s Gospel, the tail-end of a commencement speech of sorts, Jesus prepares his twelve closest followers for their first mission apart from him. They are to demonstrate what God’s Kingdom looks like, interrupting life-as-they-knew-it with new possibilities for healing, wholeness, truth-telling, and repaired relationships. […]

Downton Abbey, the much-beloved PBS television series, recently came out with a feature-length movie. The entire plot was based on the Abbey preparing for and having a 24-hour visit from the King and Queen of England. For those of you unfamiliar with the series, Downton Abbey is a large country manor that houses “upstairs” nobility, […]

Winston Churchill, arguably one of the greatest political and military leaders of the 20thcentury, planned every detail of his funeral at St. Paul’s Cathedral in London. He worked clandestinely with cathedral staff, under the code name “Operation-Hope-Not.” (That code name reveals a lot about humanity’s attitude toward death, doesn’t it?) One aspect of his funeral […]

After the sermon ends in the Ash Wednesday liturgy, it is customary for the minister to invite us, “in the name of the Church, to the observance of a holy Lent.” The Church invites us to self-examination and repentance, prayer, fasting and self-denial, and reading and meditating on God’s Holy Word. Many of us recall […]

Ezekiel 18:1-4, 25-32 This passage was written in an “in-between time,” after the first deportation of the Hebrews to Babylon in 598 but before the large exile and temple destruction in 587. Here it is God, not the prophet, who speaks in the first person. God sounds like an angry, disappointed, but ever-hopeful parent. God […]