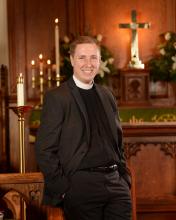 The Rev. Dr. Marshall Jolly is the 26th Rector of Grace Episcopal Church in Morganton, North Carolina (Diocese of Western North Carolina). In the wider church and community, he serves in a variety of leadership roles on various and sundry boards, commissions, committees, foundations, and task forces. He is currently diving into the 1,000+ pages of Blue Book reports in preparation for his work as a deputy to the 80th General Convention of The Episcopal Church. Marshall and his wife Elizabeth make their home in the Rectory, where they strive to meet every whim and desire of their two-year-old Himalayan cat, Hambrick.

[RCL] Isaiah 43:16-21; Psalm 126; Philippians 3:4b-14; John 12:1-8 Despite the run-of-the-mill way that John narrates this dinner party with Jesus, there is a kind of shocking absurdity to it all. Taken together with the preceding chapter, the scene unfolds like this: Word reaches Jesus that his beloved friend Lazarus is gravely ill. He sets […]

[RCL] Genesis 1:1-5; Psalm 29; Acts 19:1-7; Mark 1:4-11 Each of the four Gospels begins in their own unique manner. Matthew, for example, embarks from the very first verse on a lengthy genealogy of Jesus, tracing his Jewish lineage all the way back to Abraham. Luke, by contrast, begins with an introduction that reads like […]

[RCL]: Genesis 12:1-4a; Psalm 121; Romans 4:1-5, 13-17; John 3:1-17 There is a trend among preachers, particularly lectionary preachers, to try and find that elusive “fresh perspective” or “new insight” into the Biblical text. The more familiar the text, the more fever-pitched the effort to say something “new” about it. Enter John chapter three, verse sixteen: […]

[RCL]: Jeremiah 8:18-9:1; Psalm 79:1-9; 1 Timothy 2:1-7; Luke 16:1-13 Every now and then, we come upon a passage of Scripture that is especially challenging to preach on. Sometimes, the homiletical difficulty comes from the fact that the text is so familiar that just about everything that can be said about it has been said. […]

Odds are that a quick scan of the commentaries and preaching resources written on Luke, chapter 13, would produce a common refrain: “Be careful with this passage!” The warning is a good one, as this passage causes the faithful to ask some of the most common and complicated questions in all of Christendom. They are […]

It’s a familiar scene: parents and grandparents lingering in conversation on the steps of the parish hall after coffee hour, as their children and grandchildren make the most of the beautiful early summer day. They scamper through the churchyard with cheerful squeals and, after a few moments of frolic, they decide to organize a game […]

Blessed Saint Peter: author of Scripture, first Pope, chief Apostle, teacher and defender of the faith, pillar of the Early Church, purported benefactor of the Gospel of Mark, and martyr. It is little wonder that Saint Peter gets so much good press amongst Christians! But there is one thing missing from this list. One thing, […]

In March of 1979, a nonprofit organization by the name of the Cable-Satellite Public Affairs Network was launched. It is better-known by its acronym: C-SPAN. The organization’s mission is to provide continuous coverage of the goings-on of the US Government. You may have tuned in on occasion to watch as Congress works—or, depending on your […]

We, the faithful in Christ, gather this morning, not just with our friends and families, but also with Christians around the world and across time, joyfully proclaiming what is perhaps the most ancient creed in Christendom: Christ is risen! For the next fifty days, this great and powerful Easter proclamation will mark our liturgy, define our purpose, […]