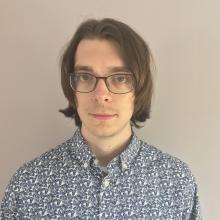 Ryan Jordan is a third year seminarian at Nashotah House Theological Seminary in Nashotah, Wisc. He lives with his wife Mallory and two cats. Ryan was raised unchurched but came to know the Lord at about 20 years of age, largely through the influence of his wife. He received a B.A. in Japanese and East Asian Studies from North Central College in Naperville, Ill., and a Master of Arts in the Liberal Arts from St. John’s College in Santa Fe, N.M.

Deuteronomy 26:1-11 One might be forgiven for thinking, after reading this lesson, that the season of stewardship drives had begun rather than Lent—what is all this about offerings? Are we being called to repent for our lackluster tithing this past year? Perhaps, but let us rather turn our attention to the confession of faith that […]

Zephaniah 3:14-20 At the heart of this passage is Zephaniah’s exultation in God’s drawing near to his people. Zephaniah cannot help but proclaim God’s character with all his poetic skill as he calls for us to join him in rejoicing. Let us then join with him in extolling the God who loved us so fiercely […]

Baruch 5:1-9 In the previous chapter of Baruch, the city of Jerusalem speaks as a mourning mother to her children who are in exile, encouraging them: “Go, my children, go; for I have been left desolate. I have taken off the robe of peace and put on sackcloth for my supplication… Take courage, my children, […]

2 Samuel 1:1, 17-27 Characters in the biblical narrative of the Old Testament tend to be complex, a mixed bag of vice and virtue, and they are good as moral exemplars only in a selective way. In this portrait, two of David’s greatest – though perhaps least understood – virtues shine forth unmixed for our […]

Acts 10:44-48 This passage records the momentous occasion of the Pentecost of the Gentiles, a major event in salvation history unveiling the total breadth of God’s saving intentions toward the whole human race. We witness here more than a mere giving of power from on high to a group of foreigners, but a breathtaking initiative—or […]

Genesis 1:1-5 In the beginning of God’s creation, Scripture records that “darkness covered the face of the deep, while a wind from God swept over the face of the waters.” The word translated wind here is the Hebrew word ruach, which can ambiguously refer to wind, breath, or Spirit. Swept is from the Hebrew rahaf, […]