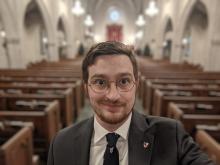 Sam Sheridan is interested in preaching and evangelism. He has studied Hebrew and the Old Testament with the intention of cultivating himself as a biblical preacher—though it’s not totally clear any two people agree on what that means. He has served at St. Margaret’s in Woodbridge and Immanuel Church-on-the-Hill in Alexandria (both in Virginia) during his time at seminary and has been able to preach almost every other week these last two years.  He has also worked on a grant with the Episcopal Evangelism Society to interview Episcopal chaplains about what chaplaincy skills can be used in congregational evangelism. This started as an independent study under the Rev. Stacy Williams-Duncan as both are interested in what chaplains can teach the wider church. But Sam believes these two callings and interests are the same. Publicly or privately proclaiming the Good News in Christ isn’t a charism that some people have access too while others don’t. Preaching or evangelizing (or pastoral care for that matter) are skills we can learn, develop, and improve upon. And Sam would very much like to keep improving.

Acts 2:14a, 36-41 It can be a boring exegetical pitfall to look at the lectionary and do too much explaining about the verses that are missing from a pericope. This passage is among the best exceptions. Peter speaks to the house of Israel as one of them, and the missing verses are his whole explanation […]

Jeremiah 31:1-6 Jeremiah is the weeping prophet, the wrathful prophet. His long ministry and preaching saw the destruction of his community and his whole world. And everybody hated Jeremiah. His friends abandoned him. People tried to murder him. Loved ones called him a treasonous snake. No one wanted to hear the future he envisioned. No […]