He might have four legs and a furry coat, but Zac the Ministry Dog is an integral part of his owners’ work. Zac belongs to Andrea Baker and her husband, Brian. The couple moved here from Los Angeles earlier this month. Brian has been an Episcopal priest for 28 years. Andrea is a chaplain in the U.S. Army. A few months ago, she was transferred to Fort Knox and the couple moved to Elizabethtown, where Brian is serving as the priest at Christ Episcopal Church downtown.

“I feel blessed that in the town we wanted to live in outside Fort Knox there was a church that needed a priest,” he said. The Bakers graduated from West Point Military Academy in 1983 and 1984 and met in high school. It was 25 years later when Brian suggested Andrea go to seminary. While there, she learned there was a need for Army Reserve chaplains. In 2014, an active-duty aviation unit in Alaska had a chaplain unable to deploy with them to Afghanistan for medical reasons. Andrea volunteered to go. She mobilized through Fort Bliss, Texas, and there she met a chaplain who had a dog she used in her ministry. As Andrea was getting on the plane to go to Afghanistan, that chaplain told her she probably could get a dog to use.

Andrea wasn’t sure at first because she didn’t know her unit yet. “I didn’t want to show up and say, ‘Sir, I think we need a puppy’ to the battalion commander,” she said. Four months into her eight-month deployment, Andrea was told a morale dog was coming and was asked to make sure it got out to see the soldiers. “I said, ‘Roger, sir, and I might be able to get us our own dog,’” she said. She was given the OK to get a dog for the unit and went to meet Zac.

Zac is a 7½-year-old Labrador Retriever. He was taught through a program called Puppies Behind Bars, which uses New York state prisoners to train the animals. The puppies are donated and trained by the inmates for about two years. In their training, they either learn to be a bomb-sniffing dog or a psychiatric service dog for veterans with Post Traumatic Stress Disorder. Zac is the latter. “I don’t personally need him for PTSD but I have him to use in ministry,” she said.

She flew from Af­ghan­istan to connect with Zac in Kuwait. There was a short handoff and then Zac was hers. “Then there we were, in the middle of the desert,” she said. There is a card on the side of Zac’s vest that tells the story of his name. It was selected to honor Airman 1st Class, Zachary Cuddeback. In March 2011, Cudde­back was assigned to pick up a load of airmen who were deploying to Afghanistan at the Frank­furt, Germany, airport.

While getting ready to leave, a gunman got on board and shot him and another non-commissioned officer. The women’s auxiliary of the American Legion in his hometown purchased Zac as a puppy and donated him to Puppies Behind Bars in honor of Cuddeback. “Part of what I do is carry the memory and honor of that airman that died,” Andrea said. After getting Zac, he served the remainder of her deployment in Af­ghan­istan with her.

“He’s the best ministry tool I can imagine.” A dog, she said, is disarming. “It’s a soft thing in a harsh environment and something goofy in a strict military environment,” she said. “A dog lets people release a sense of playfulness and something that feels like home.” Andrea said he opens doors of conversation she wouldn’t have been able to have without him.

Sometimes he would just hang out in her office. Soldiers would come in for pastoral counseling and he’d jump on the sofa with them and as they were petting him they would open up to talk to her, she said. He even flew out to MEDVAC units in the field to visit soldiers there, wearing goggles and ear protection during the helicopter rides. When she began her tour in Afghanistan, soldiers would show her photos of their families. After she got Zac, they showed her photos of their dogs back home. “There’s some chemical brain thing going on when people interact with him,” she said.

She did some research and found there is a bonding hormone released when you look into an animal’s eyes and interact with them. “There’s a natural draw to each other,” she said. Zac has a list of about 80 commands he can do but she mostly uses five. Some of the commands he knows are “got my back,” “block,” “sit,” “stand,” “back up,” “speak,” “show me your belly,” “lay down,” “snuggles and kisses” and “peak-a-boo.” He’s even been taught to salute. Dogs that go home with someone with PTSD do, even more, she said.

If their owner is having a nightmare, the dog can turn on the lights, pull back the covers, and lick their face to wake them. When she’s not on duty, she uses Zac in church work. In 2017, she was deployed to Ger­many, there she met many people who knew Cuddeback. Zac has a page on Facebook so people who knew Cuddeback can keep up with him. It’s also used as a way to honor other fallen soldiers, she said. Zac often is used as a recruiting tool at Fort Knox, but she’s looking for more opportunities to use him in her work and ministry in the community. “I feel this strong sense of stewardship with him,” she said.

– Becca Owsley is a features reporter at The News-Enterprise. 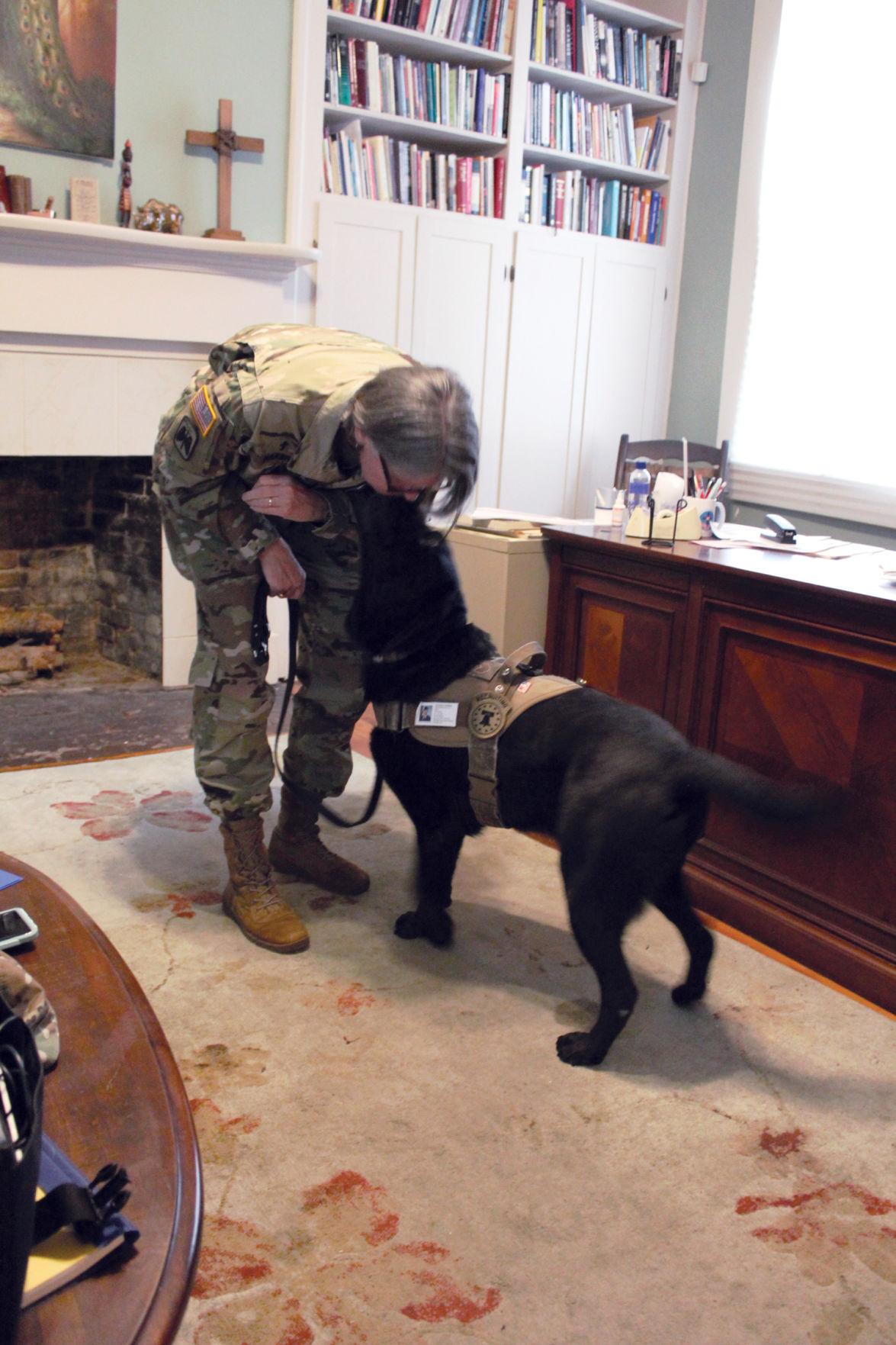 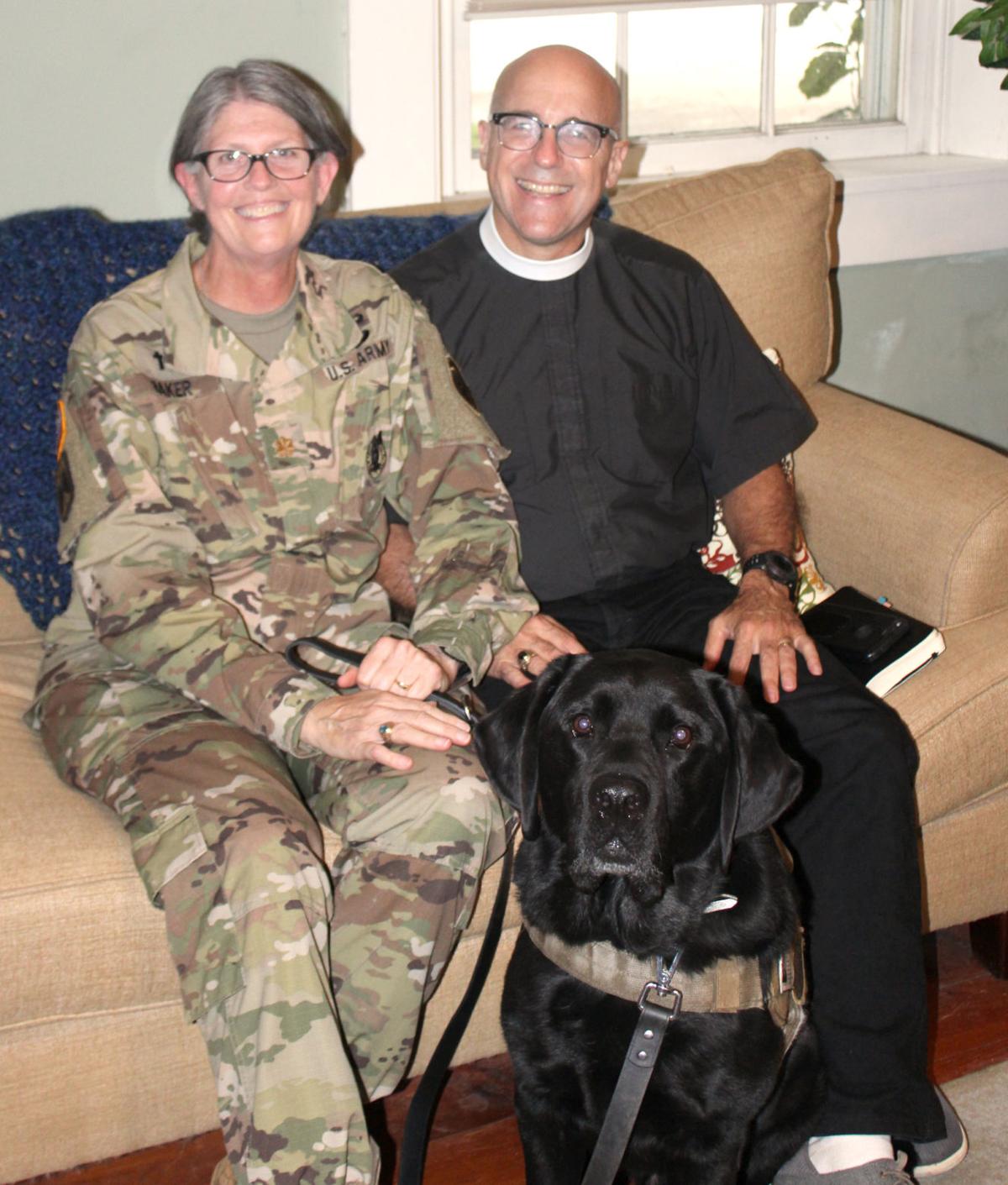 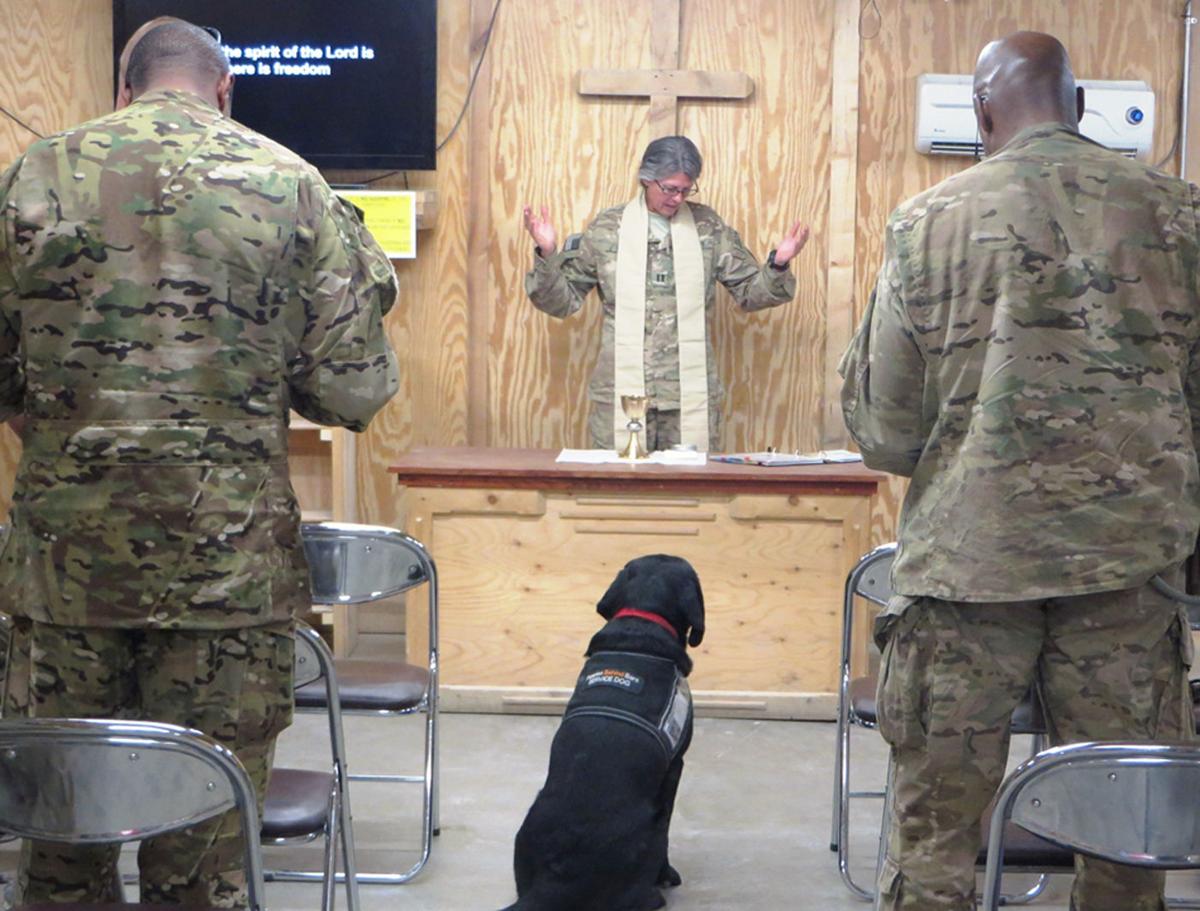 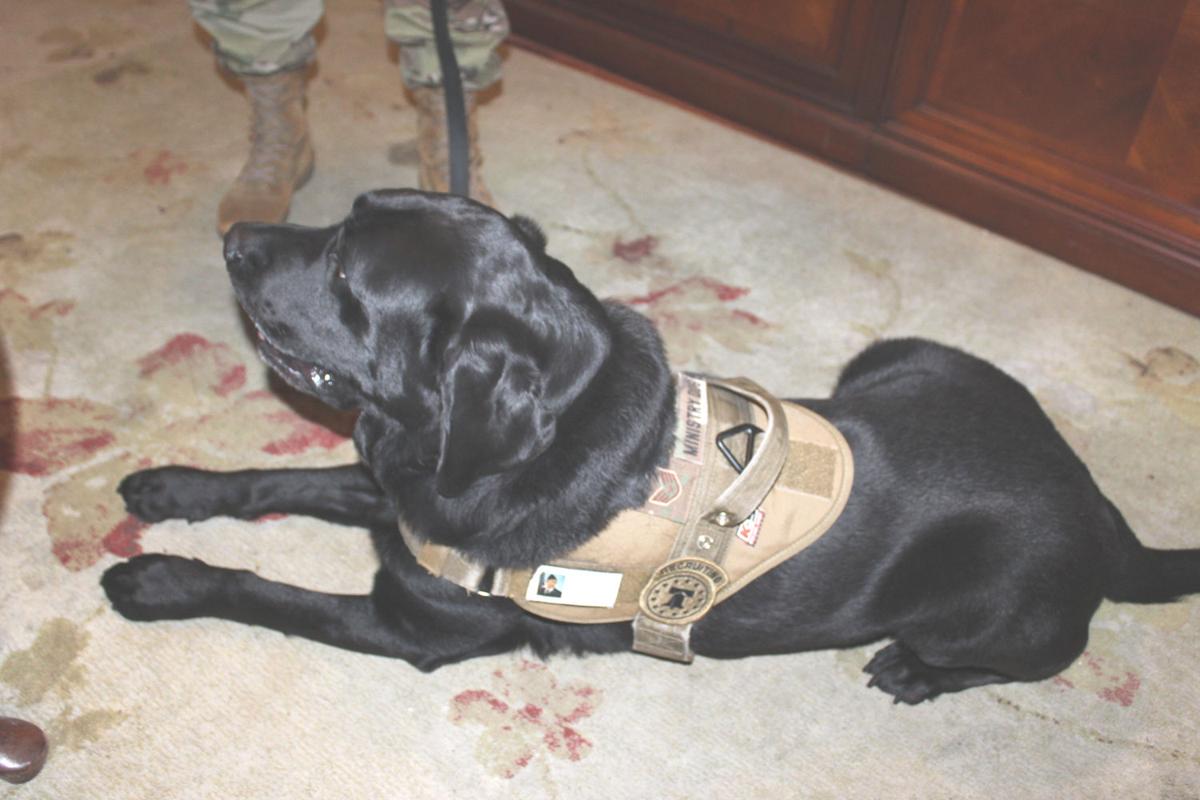 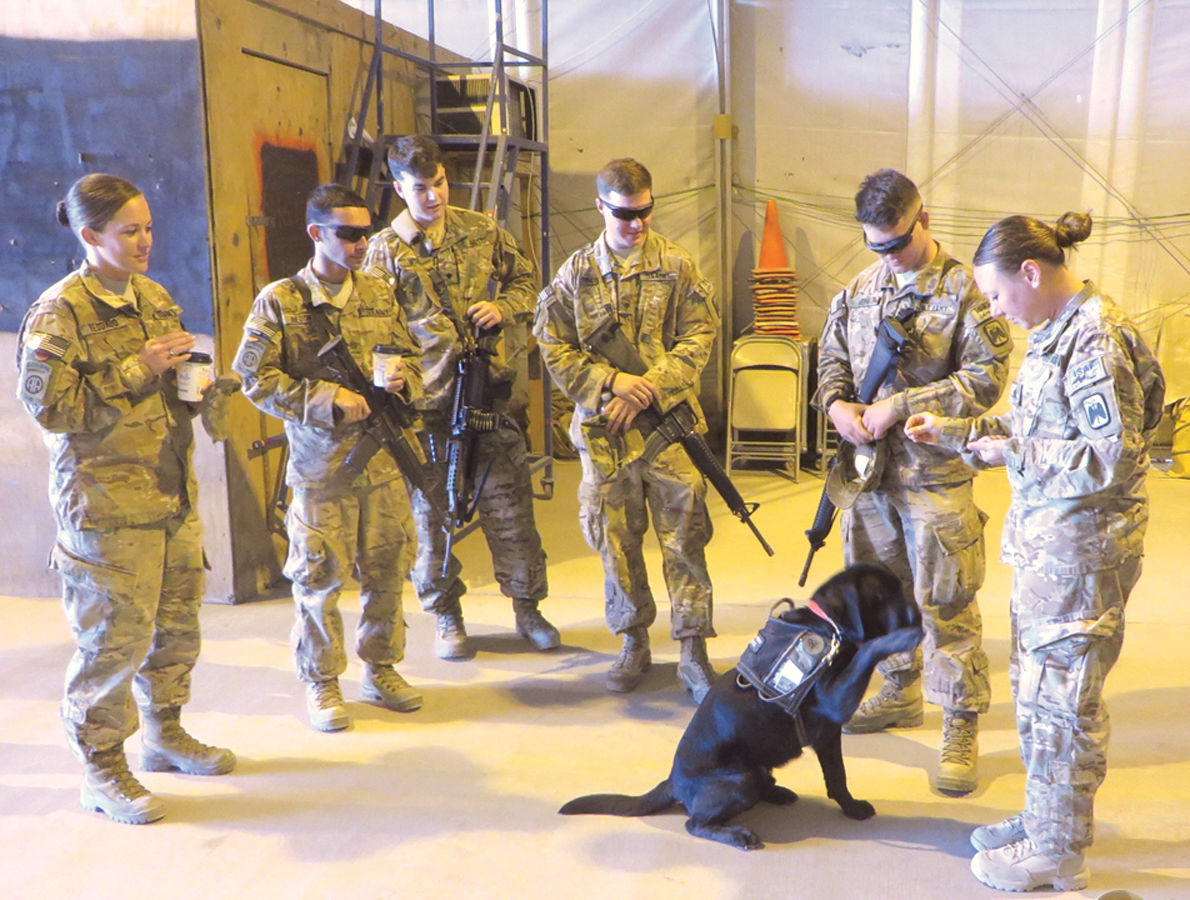 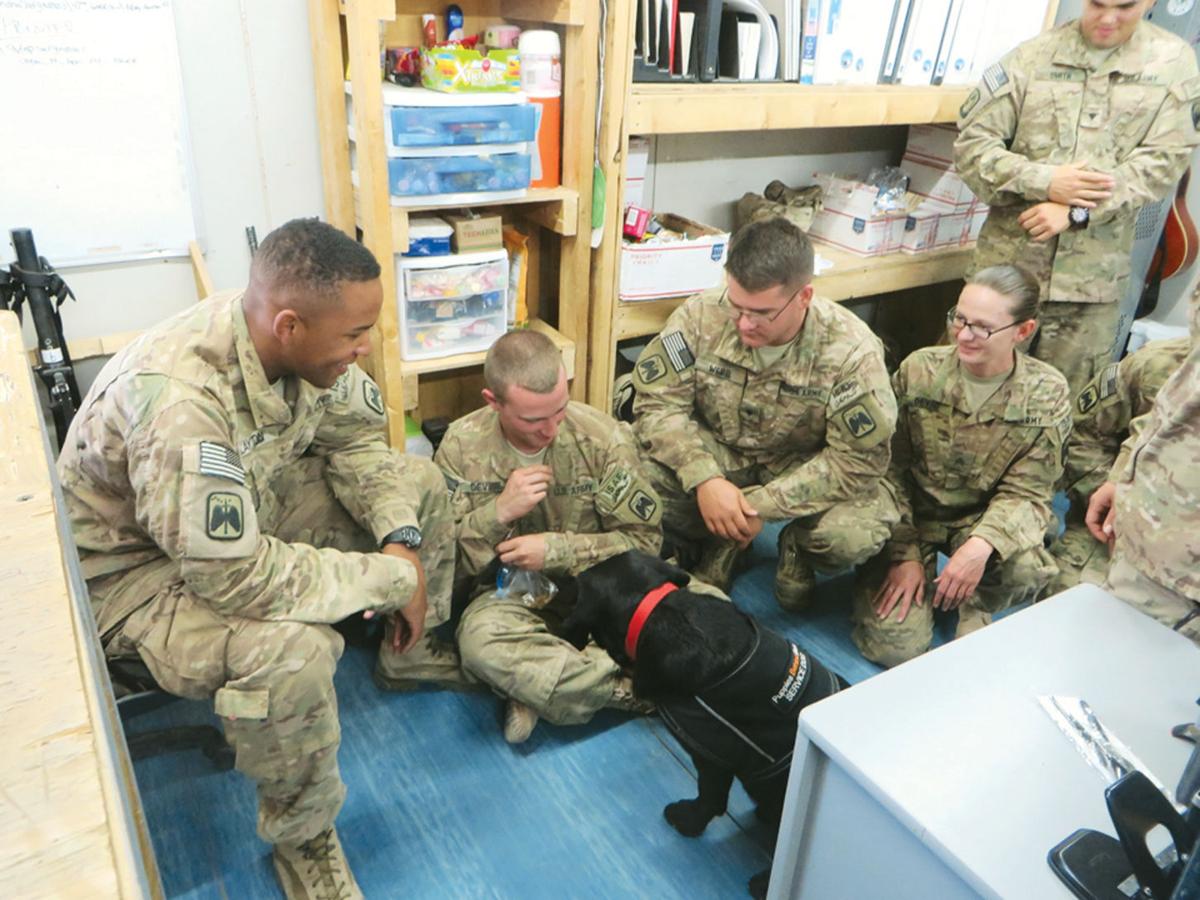 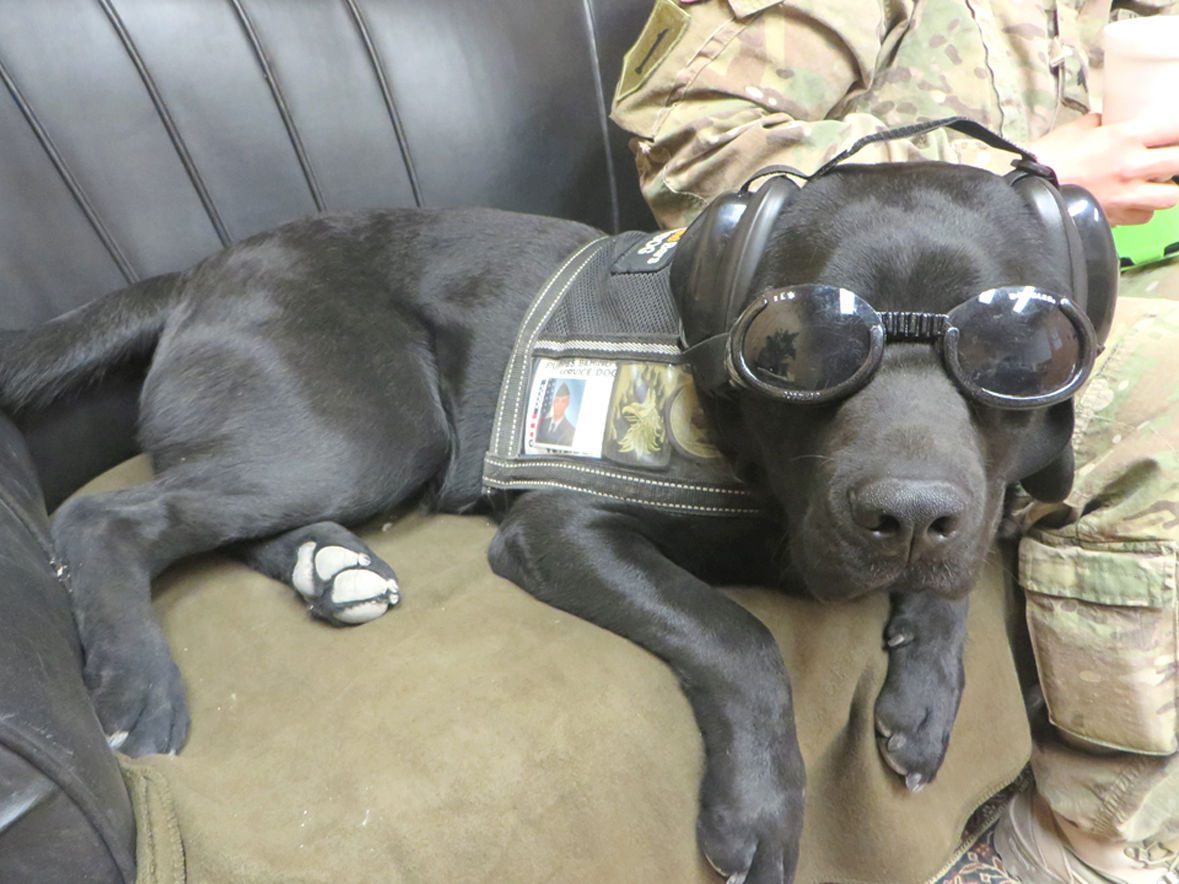 Bishop Suffragan for the Armed Forces and Federal Ministries