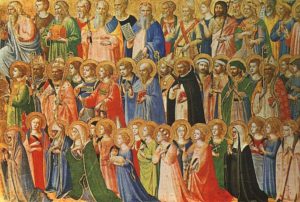 Rite I:
O Almighty God, who hast knit together thine elect in one communion and fellowship in the mystical body of thy Son Christ our Lord: Grant us grace so to follow thy blessed saints in all virtuous and godly living, that we may come to those ineffable joys which thou hast prepared for those who unfeignedly love thee; through the same Jesus Christ our Lord, who with thee and the Holy Spirit liveth and reigneth, one God, in glory everlasting. Amen.

Rite II:
Almighty God, you have knit together your elect in one communion and fellowship in the mystical body of your Son Christ our Lord: Give us grace so to follow your blessed saints in all virtuous and godly living, that we may come to those ineffable joys that you have prepared for those who truly love you; through Jesus Christ our Lord, who with you and the Holy Spirit lives and reigns, one God, in glory everlasting. Amen.

1 But the souls of the righteous are in the hand of God,
and no torment will ever touch them.
2 In the eyes of the foolish they seemed to have died,
and their departure was thought to be a disaster,
3 and their going from us to be their destruction;
but they are at peace.
4 For though in the sight of others they were punished,
their hope is full of immortality.
5 Having been disciplined a little, they will receive great good,
because God tested them and found them worthy of himself;
6 like gold in the furnace he tried them,
and like a sacrificial burnt-offering he accepted them.
7 In the time of their visitation they will shine forth,
and will run like sparks through the stubble.
8 They will govern nations and rule over peoples,
and the Lord will reign over them for ever.
9 Those who trust in him will understand truth,
and the faithful will abide with him in love,
because grace and mercy are upon his holy ones,
and he watches over his elect.

6On this mountain the Lord of hosts will make for all peoples a feast of rich food, a feast of well-aged wines, of rich food filled with marrow, of well-aged wines strained clear. 7And he will destroy on this mountain the shroud that is cast over all peoples, the sheet that is spread over all nations; he will swallow up death forever. 8Then the Lord God will wipe away the tears from all faces, and the disgrace of his people he will take away from all the earth, for the Lord has spoken.

9It will be said on that day, Lo, this is our God; we have waited for him, so that he might save us. This is the Lord for whom we have waited; let us be glad and rejoice in his salvation.

1 The earth is the Lord’s and all that is in it,
the world, and those who live in it;
2 for he has founded it on the seas,
and established it on the rivers.

3 Who shall ascend the hill of the Lord?
And who shall stand in his holy place?
4 Those who have clean hands and pure hearts,
who do not lift up their souls to what is false,
and do not swear deceitfully.
5 They will receive blessing from the Lord,
and vindication from the God of their salvation.
6 Such is the company of those who seek him,
who seek the face of the God of Jacob.

11Then I saw a new heaven and a new earth; for the first heaven and the first earth had passed away, and the sea was no more. 2And I saw the holy city, the new Jerusalem, coming down out of heaven from God, prepared as a bride adorned for her husband. 3And I heard a loud voice from the throne saying, “See, the home of God is among mortals. He will dwell with them as their God; they will be his peoples, and God himself will be with them; 4he will wipe every tear from their eyes. Death will be no more; mourning and crying and pain will be no more, for the first things have passed away.” 5And the one who was seated on the throne said, “See, I am making all things new.” Also he said, “Write this, for these words are trustworthy and true.” 6Then he said to me, “It is done! I am the Alpha and the Omega, the beginning and the end.

32When Mary came where Jesus was and saw him, she knelt at his feet and said to him, “Lord, if you had been here, my brother would not have died.”

33When Jesus saw her weeping, and the Jews who came with her also weeping, he was greatly disturbed in spirit and deeply moved. 34He said, “Where have you laid him?” They said to him, “Lord, come and see.”35Jesus began to weep. 36So the Jews said, “See how he loved him!”37But some of them said, “Could not he who opened the eyes of the blind man have kept this man from dying?” 38Then Jesus, again greatly disturbed, came to the tomb. It was a cave, and a stone was lying against it. 39Jesus said, “Take away the stone.” Martha, the sister of the dead man, said to him, “Lord, already there is a stench because he has been dead four days.” 40Jesus said to her, “Did I not tell you that if you believed, you would see the glory of God?” 41So they took away the stone. And Jesus looked upward and said, “Father, I thank you for having heard me. 42I knew that you always hear me, but I have said this for the sake of the crowd standing here, so that they may believe that you sent me.” 43When he had said this, he cried with a loud voice, “Lazarus, come out!” 44The dead man came out, his hands and feet bound with strips of cloth, and his face wrapped in a cloth. Jesus said to them, “Unbind him, and let him go.”

Find more resources for All Saints’ Day B