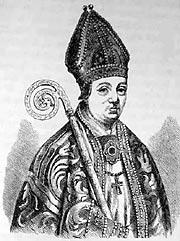 Rite I:
Keep thy church from discouragement in the day of small things, O God, in the knowledge that when thou hast begun a good work, thou shalt bring it to a fruitful conclusion, just as thou didst for thy servant Anskar; through Jesus Christ our Lord, who liveth and reigneth with thee and the Holy Ghost, one God, for ever and ever. Amen.

Rite II:
Keep your church from discouragement in the day of small things, O God, in the knowledge that when you have begun a good work, you will bring it to a fruitful conclusion, just as you did for your servant Anskar; through Jesus Christ our Lord, who lives and reigns with you and the Holy Spirit, one God, for ever and ever. Amen.

1Now the whole earth had one language and the same words. 2And as they migrated from the east, they came upon a plain in the land of Shinar and settled there. 3And they said to one another, ‘Come, let us make bricks, and burn them thoroughly.’ And they had brick for stone, and bitumen for mortar. 4Then they said, ‘Come, let us build ourselves a city, and a tower with its top in the heavens, and let us make a name for ourselves; otherwise we shall be scattered abroad upon the face of the whole earth.’ 5The Lordcame down to see the city and the tower, which mortals had built. 6And the Lord said, ‘Look, they are one people, and they have all one language; and this is only the beginning of what they will do; nothing that they propose to do will now be impossible for them. 7Come, let us go down, and confuse their language there, so that they will not understand one another’s speech.’ 8So the Lord scattered them abroad from there over the face of all the earth, and they left off building the city. 9Therefore it was called Babel, because there the Lord confused the language of all the earth; and from there the Lord scattered them abroad over the face of all the earth.

7He called the twelve and began to send them out two by two, and gave them authority over the unclean spirits. 8He ordered them to take nothing for their journey except a staff; no bread, no bag, no money in their belts; 9but to wear sandals and not to put on two tunics. 10He said to them, ‘Wherever you enter a house, stay there until you leave the place. 11If any place will not welcome you and they refuse to hear you, as you leave, shake off the dust that is on your feet as a testimony against them.’ 12So they went out and proclaimed that all should repent. 13They cast out many demons, and anointed with oil many who were sick and cured them.