The Consecration of Samuel Seabury, 1784 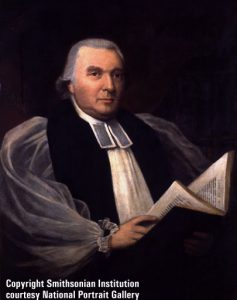 Rite I:
We give thanks to thee, O Lord our God, for thy goodness in bestowing upon this church the gift of the episcopate; and we pray that, joined together in unity with our bishops and nourished by thy holy sacraments, we may proclaim the Gospel of redemption with apostolic zeal; through Jesus Christ our Lord, who liveth and reigneth with thee and the Holy Ghost, one God, now and for ever. Amen.

Rite II:
We give you thanks, O Lord our God, for your goodness in bestowing upon this church the gift of the episcopate; and we pray that, joined together in unity with our bishops and nourished by your holy sacraments, we may proclaim the Gospel of redemption with apostolic zeal; through Jesus Christ our Lord, who lives and reigns with you and the Holy Spirit, one God, now and for ever. Amen.

1When Samuel became old, he made his sons judges over Israel. 2The name of his firstborn son was Joel, and the name of his second, Abijah; they were judges in Beer-sheba. 3Yet his sons did not follow in his ways, but turned aside after gain; they took bribes and perverted justice.

4Then all the elders of Israel gathered together and came to Samuel at Ramah, 5and said to him, ‘You are old and your sons do not follow in your ways; appoint for us, then, a king to govern us, like other nations.’ 6But the thing displeased Samuel when they said, ‘Give us a king to govern us.’ Samuel prayed to the Lord, 7and the Lord said to Samuel, ‘Listen to the voice of the people in all that they say to you; for they have not rejected you, but they have rejected me from being king over them. 8Just as they have done to me, from the day I brought them up out of Egypt to this day, forsaking me and serving other gods, so also they are doing to you. 9Now then, listen to their voice; only—you shall solemnly warn them, and show them the ways of the king who shall reign over them.’

10So Samuel reported all the words of the Lord to the people who were asking him for a king. 11He said, ‘These will be the ways of the king who will reign over you: he will take your sons and appoint them to his chariots and to be his horsemen, and to run before his chariots; 12and he will appoint for himself commanders of thousands and commanders of fifties, and some to plough his ground and to reap his harvest, and to make his implements of war and the equipment of his chariots. 13He will take your daughters to be perfumers and cooks and bakers. 14He will take the best of your fields and vineyards and olive orchards and give them to his courtiers. 15He will take one-tenth of your grain and of your vineyards and give it to his officers and his courtiers. 16He will take your male and female slaves, and the best of your cattle and donkeys, and put them to his work. 17He will take one-tenth of your flocks, and you shall be his slaves. 18And in that day you will cry out because of your king, whom you have chosen for yourselves; but the Lord will not answer you in that day.’

19But the people refused to listen to the voice of Samuel; they said, ‘No! but we are determined to have a king over us, 20so that we also may be like other nations, and that our king may govern us and go out before us and fight our battles.’ 21When Samuel had heard all the words of the people, he repeated them in the ears of the Lord. 22The Lord said to Samuel, ‘Listen to their voice and set a king over them.’ Samuel then said to the people of Israel, ‘Each of you return home.’

35 Then Jesus went about all the cities and villages, teaching in their synagogues, and proclaiming the good news of the kingdom, and curing every disease and every sickness. 36When he saw the crowds, he had compassion for them, because they were harassed and helpless, like sheep without a shepherd. 37Then he said to his disciples, ‘The harvest is plentiful, but the labourers are few; 38therefore ask the Lord of the harvest to send out labourers into his harvest.’