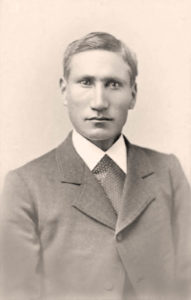 Rite I:
O God of unsearchable wisdom and mercy; Liberate us from bondage to self, and empower us to serve thee and our neighbors that like thy servant David Oakerhater, we might bring those who do not know thee to the knowledge and love of thee; through Jesus Christ, the captain of our salvation, who liveth and reigneth with thee and the Holy Ghost, one God for ever and ever. Amen.

Rite II:
O God of unsearchable wisdom and mercy; Liberate us from bondage to self, and empower us to serve you and our neighbors, that like your servant David Oakerhater, we might bring those who do not know you to the knowledge and love of you; through Jesus Christ, the captain of our salvation, who lives and reigns with you and the Holy Spirit, one God for ever and ever. Amen.

3Then the king commanded his palace master Ashpenaz to bring some of the Israelites of the royal family and of the nobility, 4young men without physical defect and handsome, versed in every branch of wisdom, endowed with knowledge and insight, and competent to serve in the king’s palace; they were to be taught the literature and language of the Chaldeans. 5The king assigned them a daily portion of the royal rations of food and wine. They were to be educated for three years, so that at the end of that time they could be stationed in the king’s court. 6Among them were Daniel, Hananiah, Mishael, and Azariah, from the tribe of Judah. 7The palace master gave them other names: Daniel he called Belteshazzar, Hananiah he called Shadrach, Mishael he called Meshach, and Azariah he called Abednego.

8But Daniel resolved that he would not defile himself with the royal rations of food and wine; so he asked the palace master to allow him not to defile himself. 9Now God allowed Daniel to receive favour and compassion from the palace master. 10The palace master said to Daniel, ‘I am afraid of my lord the king; he has appointed your food and your drink. If he should see you in poorer condition than the other young men of your own age, you would endanger my head with the king.’ 11Then Daniel asked the guard whom the palace master had appointed over Daniel, Hananiah, Mishael, and Azariah: 12‘Please test your servants for ten days. Let us be given vegetables to eat and water to drink. 13You can then compare our appearance with the appearance of the young men who eat the royal rations, and deal with your servants according to what you observe.’ 14So he agreed to this proposal and tested them for ten days. 15At the end of ten days it was observed that they appeared better and fatter than all the young men who had been eating the royal rations. 16So the guard continued to withdraw their royal rations and the wine they were to drink, and gave them vegetables. 17To these four young men God gave knowledge and skill in every aspect of literature and wisdom; Daniel also had insight into all visions and dreams.

1 After this the Lord appointed seventy others and sent them on ahead of him in pairs to every town and place where he himself intended to go. 2He said to them, ‘The harvest is plentiful, but the labourers are few; therefore ask the Lord of the harvest to send out labourers into his harvest. 3Go on your way. See, I am sending you out like lambs into the midst of wolves. 4Carry no purse, no bag, no sandals; and greet no one on the road. 5Whatever house you enter, first say, “Peace to this house!” 6And if anyone is there who shares in peace, your peace will rest on that person; but if not, it will return to you. 7Remain in the same house, eating and drinking whatever they provide, for the labourer deserves to be paid. Do not move about from house to house. 8Whenever you enter a town and its people welcome you, eat what is set before you; 9cure the sick who are there, and say to them, “The kingdom of God has come near to you.”