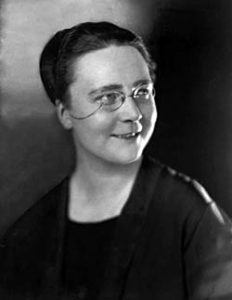 Rite I:
Almighty God, who didst strengthen thy servant Dorothy Sayers with eloquence to defend Christian teaching: Keep us, we pray, steadfast in thy true religion, that in constancy and peace we may always teach right doctrine, and teach doctrine rightly; through Jesus Christ our Lord, who liveth and reigneth with thee and the Holy Ghost, one God, now and for ever. Amen.

Rite II:
Almighty God, who strengthened your servant Dorothy Sayers with eloquence to defend Christian teaching: Keep us, we pray, steadfast in your true religion, that in constancy and peace we may always teach right doctrine, and teach doctrine rightly; through Jesus Christ our Lord, who lives and reigns with you and the Holy Spirit, one God, now and for ever. Amen.

15But when the Israelites cried out to the Lord, the Lord raised up for them a deliverer, Ehud son of Gera, the Benjaminite, a left-handed man. The Israelites sent tribute by him to King Eglon of Moab. 16Ehud made for himself a sword with two edges, a cubit in length; and he fastened it on his right thigh under his clothes. 17Then he presented the tribute to King Eglon of Moab. Now Eglon was a very fat man. 18When Ehud had finished presenting the tribute, he sent the people who carried the tribute on their way. 19But he himself turned back at the sculptured stones near Gilgal, and said, ‘I have a secret message for you, O king.’ So the king said,‘Silence!’ and all his attendants went out from his presence. 20Ehud came to him, while he was sitting alone in his cool roof-chamber, and said, ‘I have a message from God for you.’ So he rose from his seat. 21Then Ehud reached with his left hand, took the sword from his right thigh, and thrust it into Eglon’s belly; 22the hilt also went in after the blade, and the fat closed over the blade, for he did not draw the sword out of his belly; and the dirt came out. 23Then Ehud went out into the vestibule, and closed the doors of the roof-chamber on him, and locked them.

24After he had gone, the servants came. When they saw that the doors of the roof-chamber were locked, they thought, ‘He must be relieving himself in the cool chamber.’ 25So they waited until they were embarrassed. When he still did not open the doors of the roof-chamber, they took the key and opened them. There was their lord lying dead on the floor.

26Ehud escaped while they delayed, and passed beyond the sculptured stones, and escaped to Seirah. 27When he arrived, he sounded the trumpet in the hill country of Ephraim; and the Israelites went down with him from the hill country, having him at their head. 28He said to them, ‘Follow after me; for the Lord has given your enemies the Moabites into your hand.’ So they went down after him, and seized the fords of the Jordan against the Moabites, and allowed no one to cross over. 29At that time they killed about ten thousand of the Moabites, all strong, able-bodied men; no one escaped. 30So Moab was subdued that day under the hand of Israel. And the land had rest for eighty years.

1 The heavens declare the glory of God, *
and the firmament shows his handiwork.
2 One day tells its tale to another, *
and one night imparts knowledge to another.
3 Although they have no words or language, *
and their voices are not heard,
4 Their sound has gone out into all lands, *
and their message to the ends of the world.
5 In the deep has he set a pavilion for the sun; *
it comes forth like a bridegroom out of his chamber;
it rejoices like a champion to run its course.
6 It goes forth from the uttermost edge of the heavens
and runs about to the end of it again; *
nothing is hidden from its burning heat.
7 The law of the Lord is perfect
and revives the soul; *
the testimony of the Lord is sure
and gives wisdom to the innocent.
8 The statutes of the Lord are just
and rejoice the heart; *
the commandment of the Lord is clear
and gives light to the eyes.
9 The fear of the Lord is clean
and endures for ever; *
the judgments of the Lord are true
and righteous altogether.
10 More to be desired are they than gold,
more than much fine gold, *
sweeter far than honey,
than honey in the comb.
11 By them also is your servant enlightened, *
and in keeping them there is great reward.
12 Who can tell how often he offends? *
cleanse me from my secret faults.
13 Above all, keep your servant from presumptuous sins;
let them not get dominion over me; *
then shall I be whole and sound,
and innocent of a great offense.
14 Let the words of my mouth and the meditation of my
heart be acceptable in your sight, *
O Lord, my strength and my redeemer.

1 After these things Jesus showed himself again to the disciples by the Sea of Tiberias; and he showed himself in this way. 2 Gathered there together were Simon Peter, Thomas called the Twin, Nathanael of Cana in Galilee, the sons of Zebedee, and two others of his disciples. 3 Simon Peter said to them, ‘I am going fishing.’ They said to him, ‘We will go with you.’ They went out and got into the boat, but that night they caught nothing.

4 Just after daybreak, Jesus stood on the beach; but the disciples did not know that it was Jesus. 5 Jesus said to them, ‘Children, you have no fish, have you?’ They answered him, ‘No.’ 6 He said to them, ‘Cast the net to the right side of the boat, and you will find some.’ So they cast it, and now they were not able to haul it in because there were so many fish. 7 That disciple whom Jesus loved said to Peter, ‘It is the Lord!’ When Simon Peter heard that it was the Lord, he put on some clothes, for he was naked, and jumped into the lake. 8 But the other disciples came in the boat, dragging the net full of fish, for they were not far from the land, only about a hundred yards off.

9 When they had gone ashore, they saw a charcoal fire there, with fish on it, and bread.