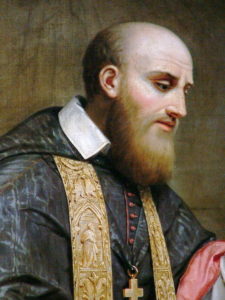 Rite I:
Most Gracious God, who hast bidden us to act justly, love mercy, and walk humbly before thee; Grant that we, like thy servants Francis and Jane, may see and serve Christ in all people, and know him as the giver of all good things; Through the same Jesus Christ our Lord, who liveth and reigneth with thee and the Holy Ghost, one God, now and for ever. Amen.

Rite II:
Most Gracious God, who has bidden us to act justly, love mercy, and walk humbly before you; Grant that we, like your servants Francis and Jane, may see and serve Christ in all people, and know him as the giver of all good things; Through the same Jesus Christ our Lord, who lives and reigns with you and the Holy Spirit, one God, now and for ever. Amen.

11Now the angel of the Lord came and sat under the oak at Ophrah, which belonged to Joash the Abiezrite, as his son Gideon was beating out wheat in the wine press, to hide it from the Midianites. 12The angel of the Lord appeared to him and said to him, ‘The Lord is with you, you mighty warrior.’ 13Gideon answered him, ‘But sir, if the Lord is with us, why then has all this happened to us? And where are all his wonderful deeds that our ancestors recounted to us, saying, “Did not the Lord bring us up from Egypt?” But now the Lord has cast us off, and given us into the hand of Midian.’ 14Then the Lord turned to him and said, ‘Go in this might of yours and deliver Israel from the hand of Midian; I hereby commission you.’ 15He responded, ‘But sir, how can I deliver Israel? My clan is the weakest in Manasseh, and I am the least in my family.’ 16The Lord said to him, ‘But I will be with you, and you shall strike down the Midianites, every one of them.’ 17Then he said to him, ‘If now I have found favour with you, then show me a sign that it is you who speak with me. 18Do not depart from here until I come to you, and bring out my present, and set it before you.’ And he said, ‘I will stay until you return.’

1 I will bless the Lord at all times; *
his praise shall ever be in my mouth.
2 I will glory in the Lord; *
let the humble hear and rejoice.
3 Proclaim with me the greatness of the Lord;
let us exalt his Name together.
4 I sought the Lord, and he answered me *
and delivered me out of all my terror.
5 Look upon him and be radiant, *
and let not your faces be ashamed.
6 I called in my affliction and the Lord heard me *
and saved me from all my troubles.
7 The angel of the Lord encompasses those who fear him, *
and he will deliver them.
8 Taste and see that the Lord is good; *
happy are they who trust in him!
9 Fear the Lord, you that are his saints, *
for those who fear him lack nothing.
10 The young lions lack and suffer hunger, *
but those who seek the Lord lack nothing that is good.
11 Come, children, and listen to me; *
I will teach you the fear of the Lord.
12 Who among you loves life *
and desires long life to enjoy prosperity?
13 Keep your tongue from evil-speaking *
and your lips from lying words.
14 Turn from evil and do good; *
seek peace and pursue it.
15 The eyes of the Lord are upon the righteous, *
and his ears are open to their cry.
16 The face of the Lord is against those who do evil, *
to root out the remembrance of them from the earth.
17 The righteous cry, and the Lord hears them *
and delivers them from all their troubles.
18 The Lord is near to the brokenhearted *
and will save those whose spirits are crushed.
19 Many are the troubles of the righteous, *
but the Lord will deliver him out of them all.
20 He will keep safe all his bones; *
not one of them shall be broken.
21 Evil shall slay the wicked, *
and those who hate the righteous will be punished.
22 The Lord ransoms the life of his servants, *
and none will be punished who trust in him.

41He sat down opposite the treasury, and watched the crowd putting money into the treasury. Many rich people put in large sums. 42A poor widow came and put in two small copper coins, which are worth a penny. 43Then he called his disciples and said to them, ‘Truly I tell you, this poor widow has put in more than all those who are contributing to the treasury. 44For all of them have contributed out of their abundance; but she out of her poverty has put in everything she had, all she had to live on.’