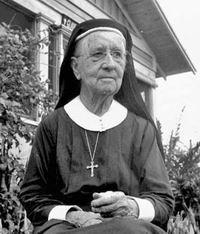 Rite I:
Holy God, fill us with compassion and respect for all people, and empower us for the work of ministry whether near or far away; that like thy servant Harriet Bedell, we may show forth thy praise, not only with our lips, but in our lives. Through Jesus Christ our Lord, who liveth and reigneth with thee and the Holy Ghost, one God, for ever and ever. Amen.

Rite II:
Holy God, fill us with compassion and respect for all people, and empower us for the work of ministry whether near or far away; that like thy servant Harriet Bedell, we may how forth your praise, not only with our lips, but in our lives. Through Jesus Christ our Lord, who lives and reigns with you and the Holy Spirit, one God, for ever and ever. Amen.

1Now a man from the house of Levi went and married a Levite woman. 2The woman conceived and bore a son; and when she saw that he was a fine baby, she hid him for three months. 3When she could hide him no longer she got a papyrus basket for him, and plastered it with bitumen and pitch; she put the child in it and placed it among the reeds on the bank of the river. 4His sister stood at a distance, to see what would happen to him.

5The daughter of Pharaoh came down to bathe at the river, while her attendants walked beside the river. She saw the basket among the reeds and sent her maid to bring it. 6When she opened it, she saw the child. He was crying, and she took pity on him. ‘This must be one of the Hebrews’ children,’ she said. 7Then his sister said to Pharaoh’s daughter, ‘Shall I go and get you a nurse from the Hebrew women to nurse the child for you?’ 8Pharaoh’s daughter said to her, ‘Yes.’ So the girl went and called the child’s mother. 9Pharaoh’s daughter said to her, ‘Take this child and nurse it for me, and I will give you your wages.’ So the woman took the child and nursed it. 10When the child grew up, she brought him to Pharaoh’s daughter, and she took him as her son. She named him Moses, ‘because’, she said, ‘I drew him out of the water.’

1When Jesus saw the crowds, he went up the mountain; and after he sat down, his disciples came to him. 2Then he began to speak, and taught them, saying:

3 ‘Blessed are the poor in spirit, for theirs is the kingdom of heaven.

4 ‘Blessed are those who mourn, for they will be comforted.

5 ‘Blessed are the meek, for they will inherit the earth.

6 ‘Blessed are those who hunger and thirst for righteousness, for they will be filled.

7 ‘Blessed are the merciful, for they will receive mercy.

8 ‘Blessed are the pure in heart, for they will see God.

9 ‘Blessed are the peacemakers, for they will be called children of God.

10 ‘Blessed are those who are persecuted for righteousness’ sake, for theirs is the kingdom of heaven.

11 ‘Blessed are you when people revile you and persecute you and utter all kinds of evil against you falsely on my account. 12Rejoice and be glad, for your reward is great in heaven, for in the same way they persecuted the prophets who were before you.