Helena of Constantinople, Protector of the Holy Places, 330 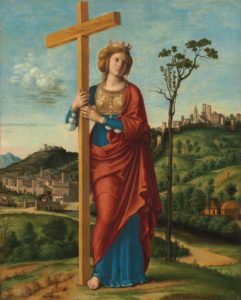 Rite I:
Most Merciful God, who didst vouchsafe to bless thy servant Helena with such grace and devotion to thee that she didst venerate the very footsteps of our Savior; Grant unto us the same grace that, aided by her prayers and example, we too may evermore behold thy glory in the cross of thy Son. Through the same Jesus Christ our Lord; who liveth and reigneth with thee, in the unity of the Holy Ghost, one God, for ever and ever. Amen.

Rite II:
Most Merciful God, who blessed your servant Helena with such grace and devotion to you that she venerated the very footsteps of our Savior; Grant unto us the same grace that, aided by her prayers and example, we also may always behold your glory in the cross of your Son. Through the same Jesus Christ our Lord; who lives and reigns with you, in the unity of the Holy Spirit, one God, for ever and ever. Amen.

1    In days to come
the mountain of the Lord’s house
shall be established as the highest of the mountains,
and shall be raised up above the hills.
Peoples shall stream to it,
2        and many nations shall come and say:
‘Come, let us go up to the mountain of the Lord,
to the house of the God of Jacob;
that he may teach us his ways
and that we may walk in his paths.’
For out of Zion shall go forth instruction,
and the word of the Lord from Jerusalem.
3    He shall judge between many peoples,
and shall arbitrate between strong nations far away;
they shall beat their swords into ploughshares,
and their spears into pruning-hooks;
nation shall not lift up sword against nation,
neither shall they learn war any more;
4    but they shall all sit under their own vines and under their own fig trees,
and no one shall make them afraid;
for the mouth of the Lord of hosts has spoken.

1 Why are the nations in an uproar? *
Why do the peoples mutter empty threats?
2 Why do the kings of the earth rise up in revolt,
and the princes plot together, *
against the Lord and against his Anointed?
3 “Let us break their yoke,” they say; *
“let us cast off their bonds from us.”
4 He whose throne is in heaven is laughing; *
the Lord has them in derision.
5 Then he speaks to them in his wrath, *
and his rage fills them with terror.
6 “I myself have set my king *
upon my holy hill of Zion.”
7 Let me announce the decree of the Lord: *
he said to me, “You are my Son;
this day have I begotten you.
8 Ask of me, and I will give you the nations for
your inheritance *
and the ends of the earth for your possession.
9 You shall crush them with an iron rod *
and shatter them like a piece of pottery.”
10 And now, you kings, be wise; *
be warned, you rulers of the earth.
11 Submit to the Lord with fear, *
and with trembling bow before him;
12 Lest he be angry and you perish; *
for his wrath is quickly kindled.
13 Happy are they all *
who take refuge in him!

26 As they led him away, they seized a man, Simon of Cyrene, who was coming from the country, and they laid the cross on him, and made him carry it behind Jesus. 27 A great number of the people followed him, and among them were women who were beating their breasts and wailing for him. 28 But Jesus turned to them and said, ‘Daughters of Jerusalem, do not weep for me, but weep for yourselves and for your children. 29 For the days are surely coming when they will say, “Blessed are the barren, and the wombs that never bore, and the breasts that never nursed.” 30 Then they will begin to say to the mountains, “Fall on us”; and to the hills, “Cover us.” 31 For if they do this when the wood is green, what will happen when it is dry?’

32 Two others also, who were criminals, were led away to be put to death with him.