The Holy Name of our Lord 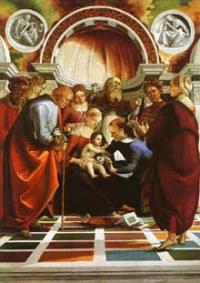 Rite I:
Eternal Father, who didst give to thine incarnate Son the holy name of Jesus to be the sign of our salvation: Plant in every heart, we beseech thee, the love of him who is the Savior of the world, even our Lord Jesus Christ; who liveth and reigneth with thee and the Holy Spirit, one God, in glory everlasting. Amen.

Rite II:
Eternal Father, you gave to your incarnate Son the holy name of Jesus to be the sign of our salvation: Plant in every heart, we pray, the love of him who is the Savior of the world, our Lord Jesus Christ; who lives and reigns with you and the Holy Spirit, one God, in glory everlasting. Amen.

22The Lord spoke to Moses, saying: 23Speak to Aaron and his sons, saying, Thus you shall bless the Israelites: You shall say to them, 24The Lord bless you and keep you; 25the Lord make his face to shine upon you, and be gracious to you; 26the Lord lift up his countenance upon you, and give you peace. 27So they shall put my name on the Israelites, and I will bless them.

4But when the fullness of time had come, God sent his Son, born of a woman, born under the law, 5in order to redeem those who were under the law, so that we might receive adoption as children. 6And because you are children, God has sent the Spirit of his Son into our hearts, crying, “Abba! Father!” 7So you are no longer a slave but a child, and if a child then also an heir, through God.

5Let the same mind be in you that was in Christ Jesus, 6who, though he was in the form of God, did not regard equality with God as something to be exploited, 7but emptied himself, taking the form of a slave, being born in human likeness. And being found in human form, 8he humbled himself and became obedient to the point of death— even death on a cross.9Therefore God also highly exalted him and gave him the name that is above every name, 10so that at the name of Jesus every knee should bend, in heaven and on earth and under the earth, 11and every tongue should confess that Jesus Christ is Lord, to the glory of God the Father.

15When the angels had left them and gone into heaven, the shepherds said to one another, “Let us go now to Bethlehem and see this thing that has taken place, which the Lord has made known to us.” 16So they went with haste and found Mary and Joseph, and the child lying in the manger.17When they saw this, they made known what had been told them about this child; 18and all who heard it were amazed at what the shepherds told them. 19But Mary treasured all these words and pondered them in her heart. 20The shepherds returned, glorifying and praising God for all they had heard and seen, as it had been told them.

21After eight days had passed, it was time to circumcise the child; and he was called Jesus, the name given by the angel before he was conceived in the womb.

The Holy Name of our LordDownload