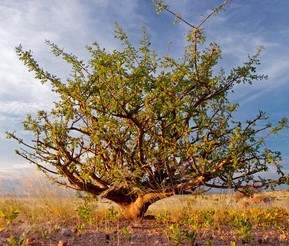 Rite I:
Almighty God, who didst reveal the resurrection of thy Son to Joanna, Mary, and Salome as they faithfully came bearing myrrh to his tomb: Grant that we too may perceive the presence of the risen Lord in the midst of pain and fear, and go forth proclaiming his resurrection; who liveth and reigneth with thee and the Holy Ghost, one God, now and for ever. Amen.

Rite II:
Almighty God, who revealed the resurrection of your Son to Joanna, Mary, and Salome as they faithfully came bearing myrrh to his tomb: Grant that we too may perceive the presence of the risen Lord in the midst of pain and fear, and go forth proclaiming his resurrection; who lives and reigns with you and the Holy Spirit, one God, now and for ever. Amen.

29 ‘Fellow Israelites, I may say to you confidently of our ancestor David that he both died and was buried, and his tomb is with us to this day. 30 Since he was a prophet, he knew that God had sworn with an oath to him that he would put one of his descendants on his throne. 31 Foreseeing this, David spoke of the resurrection of the Messiah, saying,

“He was not abandoned to Hades,
nor did his flesh experience corruption.”

32 This Jesus God raised up, and of that all of us are witnesses. 33 Being therefore exalted at[d] the right hand of God, and having received from the Father the promise of the Holy Spirit, he has poured out this that you both see and hear. 34 For David did not ascend into the heavens, but he himself says,

36 Therefore let the entire house of Israel know with certainty that God has made him both Lord and Messiah, this Jesus whom you crucified.’

1 The Lord, the God of gods, has spoken; *
he has called the earth from the rising of the sun to
its setting.
2 Out of Zion, perfect in its beauty, *
God reveals himself in glory.
3 Our God will come and will not keep silence; *
before him there is a consuming flame,
and round about him a raging storm.
4 He calls the heavens and the earth from above *
to witness the judgment of his people.
5 “Gather before me my loyal followers, *
those who have made a covenant with me
and sealed it with sacrifice.”
6 Let the heavens declare the rightness of his cause; *
for God himself is judge.
7 Hear, O my people, and I will speak:
“O Israel, I will bear witness against you; *
for I am God, your God.
8 I do not accuse you because of your sacrifices; *
your offerings are always before me.
9 I will take no bull-calf from your stalls, *
nor he-goats out of your pens;
10 For all the beasts of the forest are mine, *
the herds in their thousands upon the hills.
11 I know every bird in the sky, *
and the creatures of the fields are in my sight.
12 If I were hungry, I would not tell you, *
for the whole world is mine and all that is in it.
13 Do you think I eat the flesh of bulls, *
or drink the blood of goats?
14 Offer to God a sacrifice of thanksgiving *
and make good your vows to the Most High.
15 Call upon me in the day of trouble; *
I will deliver you, and you shall honor me.”
16 But to the wicked God says: *
“Why do you recite my statutes,
and take my covenant upon your lips;
17 Since you refuse discipline, *
and toss my words behind your back?
18 When you see a thief, you make him your friend, *
and you cast in your lot with adulterers.
19 You have loosed your lips for evil, *
and harnessed your tongue to a lie.
20 You are always speaking evil of your brother *
and slandering your own mother’s son.
21 These things you have done, and I kept still, *
and you thought that I am like you.”
22 “I have made my accusation; *
I have put my case in order before your eyes.
23 Consider this well, you who forget God, *
lest I rend you and there be none to deliver you.
24 Whoever offers me the sacrifice of thanksgiving
honors me; *
but to those who keep in my way will I show
the salvation of God.”

1 When the sabbath was over, Mary Magdalene, and Mary the mother of James, and Salome bought spices, so that they might go and anoint him. 2 And very early on the first day of the week, when the sun had risen, they went to the tomb. 3 They had been saying to one another, ‘Who will roll away the stone for us from the entrance to the tomb?’ 4 When they looked up, they saw that the stone, which was very large, had already been rolled back. 5 As they entered the tomb, they saw a young man, dressed in a white robe, sitting on the right side; and they were alarmed. 6 But he said to them, ‘Do not be alarmed; you are looking for Jesus of Nazareth, who was crucified. He has been raised; he is not here. Look, there is the place they laid him. 7 But go, tell his disciples and Peter that he is going ahead of you to Galilee; there you will see him, just as he told you.’ 8 So they went out and fled from the tomb, for terror and amazement had seized them; and they said nothing to anyone, for they were afraid.