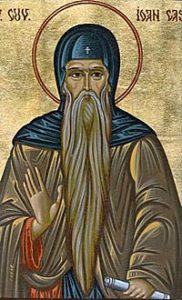 Rite I:
Holy God, whose beloved Son Jesus Christ didst bless the pure in heart: Grant that we, together with thy servant John Cassian and in union with his prayers, may ever seek the purity with which to behold thee as thou art; one God in Trinity of persons now and for ever. Amen.

Rite II:
Holy God, whose beloved Son Jesus Christ blessed the pure in heart: Grant that we, together with your servant John Cassian and in union with his prayers, may ever seek the purity with which to behold you as you are; one God in Trinity of persons now and for ever. Amen.

9 When they had crossed, Elijah said to Elisha, ‘Tell me what I may do for you, before I am taken from you.’ Elisha said, ‘Please let me inherit a double share of your spirit.’ 10He responded, ‘You have asked a hard thing; yet, if you see me as I am being taken from you, it will be granted you; if not, it will not.’ 11As they continued walking and talking, a chariot of fire and horses of fire separated the two of them, and Elijah ascended in a whirlwind into heaven. 12Elisha kept watching and crying out, ‘Father, father! The chariots of Israel and its horsemen!’ But when he could no longer see him, he grasped his own clothes and tore them in two pieces.

15 When the company of prophets who were at Jericho saw him at a distance, they declared, ‘The spirit of Elijah rests on Elisha.’ They came to meet him and bowed to the ground before him.

1 I will exalt you, O God my King, *
and bless your Name for ever and ever.
2 Every day will I bless you *
and praise your Name for ever and ever.
3 Great is the Lord and greatly to be praised; *
there is no end to his greatness.
4 One generation shall praise your works to another *
and shall declare your power.
5 I will ponder the glorious splendor of your majesty *
and all your marvelous works.
6 They shall speak of the might of your wondrous acts, *
and I will tell of your greatness.
7 They shall publish the remembrance of your great goodness; *
they shall sing of your righteous deeds.

10 He was in the world, and the world came into being through him; yet the world did not know him. 11He came to what was his own, and his own people did not accept him. 12But to all who received him, who believed in his name, he gave power to become children of God, 13who were born, not of blood or of the will of the flesh or of the will of man, but of God.

14 And the Word became flesh and lived among us, and we have seen his glory, the glory as of a father’s only son, full of grace and truth.