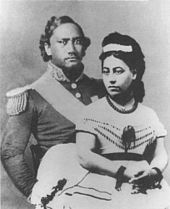 Rite I:
O God, who didst call thy servants Kamehameha and Emma to an earthly throne that they might advance thy heavenly kingdom, and gave them zeal for thy church and love for thy people: Mercifully grant that we also may be fruitful in good works and attain to the glorious crown of thy saints; through Jesus Christ our Lord, who liveth and reigneth with thee and the Holy Ghost, one God, for ever and ever. Amen.

Rite II:
O God, who called your servants Kamehameha and Emma to an earthly throne that they might advance your heavenly kingdom, and gave them zeal for your church and love for your people: Mercifully grant that we also may be fruitful in good works, and attain to the glorious crown of your saints; through Jesus Christ our Lord, who lives and reigns with you and the Holy Spirit, one God, for ever and ever. Amen.

22 Then Paul stood in front of the Areopagus and said, ‘Athenians, I see how extremely religious you are in every way. 23For as I went through the city and looked carefully at the objects of your worship, I found among them an altar with the inscription, “To an unknown god.” What therefore you worship as unknown, this I proclaim to you. 24The God who made the world and everything in it, he who is Lord of heaven and earth, does not live in shrines made by human hands, 25nor is he served by human hands, as though he needed anything, since he himself gives to all mortals life and breath and all things. 26From one ancestor he made all nations to inhabit the whole earth, and he allotted the times of their existence and the boundaries of the places where they would live, 27so that they would search for God and perhaps grope for him and find him—though indeed he is not far from each one of us. 28For “In him we live and move and have our being”; as even some of your own poets have said,
“For we too are his offspring.”
29Since we are God’s offspring, we ought not to think that the deity is like gold, or silver, or stone, an image formed by the art and imagination of mortals. 30While God has overlooked the times of human ignorance, now he commands all people everywhere to repent, 31because he has fixed a day on which he will have the world judged in righteousness by a man whom he has appointed, and of this he has given assurance to all by raising him from the dead.’

12 Happy is the nation whose God is the Lord! *
happy the people he has chosen to be his own!
13 The Lord looks down from heaven, *
and beholds all the people in the world.
14 From where he sits enthroned he turns his gaze *
on all who dwell on the earth.
15 He fashions all the hearts of them *
and understands all their works.
16 There is no king that can be saved by a mighty army;
a strong man is not delivered by his great strength.
17 The horse is a vain hope for deliverance; *
for all its strength it cannot save.
18 Behold, the eye of the Lord is upon those who fear him, *
on those who wait upon his love,
19 To pluck their lives from death, *
and to feed them in time of famine.
20 Our soul waits for the Lord; *
he is our help and our shield.
21 Indeed, our heart rejoices in him, *
for in his holy Name we put our trust.
22 Let your loving-kindness, O Lord, be upon us, *
as we have put our trust in you.