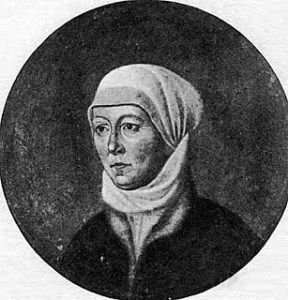 Rite I:
Almighty God, whose servant Katharina Zell toiled for the reform of thy church both in word and in deed: Fill us with the wisdom to speak out in defense of thy truth, with love for thee and for our neighbor, that we may serve thee and welcome all thy people with a mother’s heart; through Christ our Lord. Amen.

Rite II:
Almighty God, whose servant Katharina Zell toiled for the reform of your church both in word and in deed: Fill us with the wisdom to speak out in defense of your truth, with love for you and for our neighbor, that we may serve you and welcome all your people with a mother’s heart; through Christ our Lord. Amen.

6Judah took a wife for Er his firstborn; her name was Tamar. 7But Er, Judah’s firstborn, was wicked in the sight of the Lord, and the Lord put him to death. 8Then Judah said to Onan, ‘Go in to your brother’s wife and perform the duty of a brother-in-law to her; raise up offspring for your brother.’ 9But since Onan knew that the offspring would not be his, he spilled his semen on the ground whenever he went in to his brother’s wife, so that he would not give offspring to his brother. 10What he did was displeasing in the sight of the Lord, and he put him to death also. 11Then Judah said to his daughter-in-law Tamar, ‘Remain a widow in your father’s house until my son Shelah grows up’—for he feared that he too would die, like his brothers. So Tamar went to live in her father’s house.

12In course of time the wife of Judah, Shua’s daughter, died; when Judah’s time of mourning was over, he went up to Timnah to his sheep-shearers, he and his friend Hirah the Adullamite. 13When Tamar was told, ‘Your father-in-law is going up to Timnah to shear his sheep’, 14she put off her widow’s garments, put on a veil, wrapped herself up, and sat down at the entrance to Enaim, which is on the road to Timnah. She saw that Shelah was grown up, yet she had not been given to him in marriage.15When Judah saw her, he thought her to be a prostitute, for she had covered her face. 16He went over to her at the roadside, and said, ‘Come, let me come in to you’, for he did not know that she was his daughter-in-law. She said, ‘What will you give me, that you may come in to me?’ 17He answered, ‘I will send you a kid from the flock.’ And she said, ‘Only if you give me a pledge, until you send it.’ 18He said, ‘What pledge shall I give you?’ She replied, ‘Your signet and your cord, and the staff that is in your hand.’ So he gave them to her, and went in to her, and she conceived by him. 19Then she got up and went away, and taking off her veil she put on the garments of her widowhood.

20When Judah sent the kid by his friend the Adullamite, to recover the pledge from the woman, he could not find her. 21He asked the townspeople, ‘Where is the temple prostitute who was at Enaim by the wayside?’ But they said, ‘No prostitute has been here.’ 22So he returned to Judah, and said, ‘I have not found her; moreover, the townspeople said, “No prostitute has been here.” ’ 23Judah replied, ‘Let her keep the things as her own, otherwise we will be laughed at; you see, I sent this kid, and you could not find her.’

24About three months later Judah was told, ‘Your daughter-in-law Tamar has played the whore; moreover she is pregnant as a result of whoredom.’ And Judah said, ‘Bring her out, and let her be burned.’ 25As she was being brought out, she sent word to her father-in-law, ‘It was the owner of these who made me pregnant.’ And she said, ‘Take note, please, whose these are, the signet and the cord and the staff.’ 26Then Judah acknowledged them and said, ‘She is more in the right than I, since I did not give her to my son Shelah.’ And he did not lie with her again.

1 Give judgment for me, O God,
and defend my cause against an ungodly people; *
deliver me from the deceitful and the wicked.
2 For you are the God of my strength;
why have you put me from you? *
and why do I go so heavily while the enemy
oppresses me?
3 Send out your light and your truth, that they may lead me, *
and bring me to your holy hill
and to your dwelling;
4 That I may go to the altar of God,
to the God of my joy and gladness; *
and on the harp I will give thanks to you, O God my God.
5 Why are you so full of heaviness, O my soul? *
and why are you so disquieted within me?
6 Put your trust in God; *
for I will yet give thanks to him,
who is the help of my countenance, and my God.

23He said to them, ‘Doubtless you will quote to me this proverb, “Doctor, cure yourself!” And you will say, “Do here also in your home town the things that we have heard you did at Capernaum.” ’ 24And he said, ‘Truly I tell you, no prophet is accepted in the prophet’s home town. 25But the truth is, there were many widows in Israel in the time of Elijah, when the heaven was shut up for three years and six months, and there was a severe famine over all the land; 26yet Elijah was sent to none of them except to a widow at Zarephath in Sidon. 27There were also many lepersin Israel in the time of the prophet Elisha, and none of them was cleansed except Naaman the Syrian.’ 28When they heard this, all in the synagogue were filled with rage. 29They got up, drove him out of the town, and led him to the brow of the hill on which their town was built, so that they might hurl him off the cliff. 30But he passed through the midst of them and went on his way.