Mary and Martha of Bethany 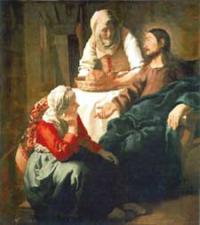 Rite I:
O God, heavenly Father, whose Son Jesus Christ enjoyed rest and refreshment in the home of Mary and Martha of Bethany: Give us the will to love thee, open our hearts to hear thee, and strengthen our hands to serve thee in others for his sake; who liveth and reigneth with thee and the Holy Ghost, one God, now and for ever. Amen.

Rite II:
O God, heavenly Father, your Son Jesus Christ enjoyed rest and refreshment in the home of Mary and Martha of Bethany: Give us the will to love you, open our hearts to hear you, and strengthen our hands to serve you in others for his sake; who lives and reigns with you and the Holy Spirit, one God, now and for ever. Amen.

18Then Abigail hurried and took two hundred loaves, two skins of wine, five sheep ready dressed, five measures of parched grain, one hundred clusters of raisins, and two hundred cakes of figs. She loaded them on donkeys 19and said to her young men, “Go on ahead of me; I am coming after you.” But she did not tell her husband Nabal. 20As she rode on the donkey and came down under cover of the mountain, David and his men came down toward her; and she met them. 21Now David had said, “Surely it was in vain that I protected all that this fellow has in the wilderness, so that nothing was missed of all that belonged to him; but he has returned me evil for good. 22God do so to David and more also, if by morning I leave so much as one male of all who belong to him.” 23When Abigail saw David, she hurried and alighted from the donkey, fell before David on her face, bowing to the ground. 24She fell at his feet and said, “Upon me alone, my lord, be the guilt; please let your servant speak in your ears, and hear the words of your servant. 25My lord, do not take seriously this ill-natured fellow, Nabal; for as his name is, so is he; Nabal is his name, and folly is with him; but I, your servant, did not see the young men of my lord, whom you sent. 26Now then, my lord, as the Lordlives, and as you yourself live, since the Lord has restrained you from bloodguilt and from taking vengeance with your own hand, now let your enemies and those who seek to do evil to my lord be like Nabal. 27And now let this present that your servant has brought to my lord be given to the young men who follow my lord. 28Please forgive the trespass of your servant; for the Lord will certainly make my lord a sure house, because my lord is fighting the battles of the Lord; and evil shall not be found in you so long as you live. 29If anyone should rise up to pursue you and to seek your life, the life of my lord shall be bound in the bundle of the living under the care of the Lord your God; but the lives of your enemies he shall sling out as from the hollow of a sling. 30When the Lord has done to my lord according to all the good that he has spoken concerning you, and has appointed you prince over Israel, 31my lord shall have no cause of grief, or pangs of conscience, for having shed blood without cause or for having saved himself. And when the Lord has dealt well with my lord, then remember your servant.”

32David said to Abigail, “Blessed be the Lord, the God of Israel, who sent you to meet me today! 33Blessed be your good sense, and blessed be you, who have kept me today from bloodguilt and from avenging myself by my own hand! 34For as surely as the Lord the God of Israel lives, who has restrained me from hurting you, unless you had hurried and come to meet me, truly by morning there would not have been left to Nabal so much as one male.” 35Then David received from her hand what she had brought him; he said to her, “Go up to your house in peace; see, I have heeded your voice, and I have granted your petition.”

36Abigail came to Nabal; he was holding a feast in his house, like the feast of a king. Nabal’s heart was merry within him, for he was very drunk; so she told him nothing at all until the morning light. 37In the morning, when the wine had gone out of Nabal, his wife told him these things, and his heart died within him; he became like a stone. 38About ten days later the Lord struck Nabal, and he died.

1 There is a voice of rebellion deep in the heart of the wicked; *
there is no fear of God before his eyes.
2 He flatters himself in his own eyes *
that his hateful sin will not be found out.
3 The words of his mouth are wicked and deceitful, *
he has left off acting wisely and doing good.
4 He thinks up wickedness upon his bed
and has set himself in no good way; *
he does not abhor that which is evil.
5 Your love, O Lord, reaches to the heavens, *
and your faithfulness to the clouds.

38Now as they went on their way, he entered a certain village, where a woman named Martha welcomed him into her home. 39She had a sister named Mary, who sat at the Lord’s feet and listened to what he was saying. 40But Martha was distracted by her many tasks; so she came to him and asked, “Lord, do you not care that my sister has left me to do all the work by myself? Tell her then to help me.” 41But the Lord answered her, “Martha, Martha, you are worried and distracted by many things; 42there is need of only one thing. Mary has chosen the better part, which will not be taken away from her.”