Nativity of Saint John the Baptist 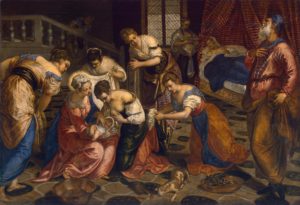 Rite I:
Almighty God, by whose providence thy servant John the Baptist was wonderfully born, and sent to prepare the way of thy Son our Savior by preaching repentance: Make us so to follow his doctrine and holy life, that we may truly repent according to his preaching; and after his example constantly speak the truth, boldly rebuke vice, and patiently suffer for the truth’s sake; through the same thy Son Jesus Christ our Lord, who liveth and reigneth with thee and the Holy Spirit one God, for ever and ever. Amen.

Rite II:
Almighty God, by whose providence your servant John the Baptist was wonderfully born, and sent to prepare the way of your Son our Savior by preaching repentance: Make us so to follow his teaching and holy life, that we may truly repent according to his preaching; and, following his example, constantly speak the truth, boldly rebuke vice, and patiently suffer for the truth’s sake; through Jesus Christ your Son our Lord, who lives and reigns with you and the Holy Spirit, one God, for ever and

1Comfort, O comfort my people,
says your God.
2 Speak tenderly to Jerusalem,
and cry to her
that she has served her term,
that her penalty is paid,
that she has received from the Lord’s hand
double for all her sins.

3 A voice cries out:
‘In the wilderness prepare the way of the Lord,
make straight in the desert a highway for our God.
4 Every valley shall be lifted up,
and every mountain and hill be made low;
the uneven ground shall become level,
and the rough places a plain.
5 Then the glory of the Lord shall be revealed,
and all people shall see it together,
for the mouth of the Lord has spoken.’

6 A voice says, ‘Cry out!’
And I said, ‘What shall I cry?’
All people are grass,
their constancy is like the flower of the field.
7 The grass withers, the flower fades,
when the breath of the Lord blows upon it;
surely the people are grass.
8 The grass withers, the flower fades;
but the word of our God will stand for ever.
9 Get you up to a high mountain,
O Zion, herald of good tidings;*
lift up your voice with strength,
O Jerusalem, herald of good tidings,*
lift it up, do not fear;
say to the cities of Judah,
‘Here is your God!’
10 See, the Lord God comes with might,
and his arm rules for him;
his reward is with him,
and his recompense before him.
11 He will feed his flock like a shepherd;
he will gather the lambs in his arms,
and carry them in his bosom,
and gently lead the mother sheep.

1 [You have been gracious to your land, O Lord, *
you have restored the good fortune of Jacob.
2 You have forgiven the iniquity of your people *
and blotted out all their sins.
3 You have withdrawn all your fury *
and turned yourself from your wrathful indignation.
4 Restore us then, O God our Savior; *
let your anger depart from us.
5 Will you be displeased with us for ever? *
will you prolong your anger from age to age?
6 Will you not give us life again, *
that your people may rejoice in you?]

7 Show us your mercy, O Lord, *
and grant us your salvation.
8 I will listen to what the Lord God is saying, *
for he is speaking peace to his faithful people
and to those who turn their hearts to him.
9 Truly, his salvation is very near to those who fear him, *
that his glory may dwell in our land.
10 Mercy and truth have met together; *
righteousness and peace have kissed each other.
11 Truth shall spring up from the earth, *
and righteousness shall look down from heaven.
12 The Lord will indeed grant prosperity, *
and our land will yield its increase.
13 Righteousness shall go before him, *
and peace shall be a pathway for his feet.

And on the sabbath day they went into the synagogue and sat down. 15After the reading of the law and the prophets, the officials of the synagogue sent them a message, saying, ‘Brothers, if you have any word of exhortation for the people, give it.’ 16So Paul stood up and with a gesture began to speak:

‘You Israelites, and others who fear God, listen. 17The God of this people Israel chose our ancestors and made the people great during their stay in the land of Egypt, and with uplifted arm he led them out of it. 18For about forty years he put up with them in the wilderness. 19After he had destroyed seven nations in the land of Canaan, he gave them their land as an inheritance 20for about four hundred and fifty years. After that he gave them judges until the time of the prophet Samuel. 21Then they asked for a king; and God gave them Saul son of Kish, a man of the tribe of Benjamin, who reigned for forty years. 22When he had removed him, he made David their king. In his testimony about him he said, “I have found David, son of Jesse, to be a man after my heart, who will carry out all my wishes.” 23Of this man’s posterity God has brought to Israel a Saviour, Jesus, as he promised; 24before his coming John had already proclaimed a baptism of repentance to all the people of Israel. 25And as John was finishing his work, he said, “What do you suppose that I am? I am not he. No, but one is coming after me; I am not worthy to untie the thong of the sandals* on his feet.”

26 ‘My brothers, you descendants of Abraham’s family, and others who fear God, to us the message of this salvation has been sent.

57 Now the time came for Elizabeth to give birth, and she bore a son. 58Her neighbours and relatives heard that the Lord had shown his great mercy to her, and they rejoiced with her.

59 On the eighth day they came to circumcise the child, and they were going to name him Zechariah after his father. 60But his mother said, ‘No; he is to be called John.’ 61They said to her, ‘None of your relatives has this name.’ 62Then they began motioning to his father to find out what name he wanted to give him. 63He asked for a writing-tablet and wrote, ‘His name is John.’ And all of them were amazed. 64Immediately his mouth was opened and his tongue freed, and he began to speak, praising God. 65Fear came over all their neighbours, and all these things were talked about throughout the entire hill country of Judea. 66All who heard them pondered them and said, ‘What then will this child become?’ For, indeed, the hand of the Lord was with him.

67 Then his father Zechariah was filled with the Holy Spirit and spoke this prophecy:
68 ‘Blessed be the Lord God of Israel,
for he has looked favourably on his people and redeemed them.
69 He has raised up a mighty saviour for us
in the house of his servant David,
70 as he spoke through the mouth of his holy prophets from of old,
71   that we would be saved from our enemies and from the hand of all who hate us.
72 Thus he has shown the mercy promised to our ancestors,
and has remembered his holy covenant,
73 the oath that he swore to our ancestor Abraham,
to grant us 74that we, being rescued from the hands of our enemies,
might serve him without fear, 75in holiness and righteousness
before him all our days.
76 And you, child, will be called the prophet of the Most High;
for you will go before the Lord to prepare his ways,
77 to give knowledge of salvation to his people
by the forgiveness of their sins.
78 By the tender mercy of our God,
the dawn from on high will break upon us,
79 to give light to those who sit in darkness and in the shadow of death,
to guide our feet into the way of peace.’

80 The child grew and became strong in spirit, and he was in the wilderness until the day he appeared publicly to Israel.