The Nativity of the Blessed Virgin Mary 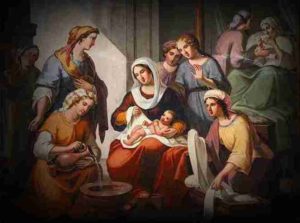 Rite I:
Father in heaven, by whose grace the virgin mother of thy incarnate Son was blessed in bearing him, but still more blessed in keeping thy word: Grant us who honor the exaltation of her lowliness to follow the example of her devotion to thy will; through the same Jesus Christ our Lord, who liveth and reigneth with thee and the Holy Ghost, one God, for ever and ever. Amen.

Rite II:
Father in heaven, by your grace the virgin mother of your incarnate Son was blessed in bearing him, but still more blessed in keeping your word: Grant us who honor the exaltation of her lowliness to follow the example of her devotion to your will; through Jesus Christ our Lord, who lives and reigns with you and the Holy Spirit, one God, for ever and ever. Amen.

1 There was a certain man of Ramathaim, a Zuphite from the hill country of Ephraim, whose name was Elkanah son of Jeroham son of Elihu son of Tohu son of Zuph, an Ephraimite. 2 He had two wives; the name of one was Hannah, and the name of the other Peninnah. Peninnah had children, but Hannah had no children.

3 Now this man used to go up year by year from his town to worship and to sacrifice to the Lord of hosts at Shiloh, where the two sons of Eli, Hophni and Phinehas, were priests of the Lord. 4 On the day when Elkanah sacrificed, he would give portions to his wife Peninnah and to all her sons and daughters; 5 but to Hannah he gave a double portion, because he loved her, though the Lord had closed her womb. 6 Her rival used to provoke her severely, to irritate her, because the Lord had closed her womb. 7 So it went on year after year; as often as she went up to the house of the Lord, she used to provoke her. Therefore Hannah wept and would not eat. 8 Her husband Elkanah said to her, ‘Hannah, why do you weep? Why do you not eat? Why is your heart sad? Am I not more to you than ten sons?’

9 After they had eaten and drunk at Shiloh, Hannah rose and presented herself before the Lord. Now Eli the priest was sitting on the seat beside the doorpost of the temple of the Lord. 10 She was deeply distressed and prayed to the Lord, and wept bitterly. 11 She made this vow: ‘O Lord of hosts, if only you will look on the misery of your servant, and remember me, and not forget your servant, but will give to your servant a male child, then I will set him before you as a nazirite until the day of his death. He shall drink neither wine nor intoxicants, and no razor shall touch his head.’

12 As she continued praying before the Lord, Eli observed her mouth. 13 Hannah was praying silently; only her lips moved, but her voice was not heard; therefore Eli thought she was drunk. 14 So Eli said to her, ‘How long will you make a drunken spectacle of yourself? Put away your wine.’ 15 But Hannah answered, ‘No, my lord, I am a woman deeply troubled; I have drunk neither wine nor strong drink, but I have been pouring out my soul before the Lord. 16 Do not regard your servant as a worthless woman, for I have been speaking out of my great anxiety and vexation all this time.’ 17 Then Eli answered, ‘Go in peace; the God of Israel grant the petition you have made to him.’ 18 And she said, ‘Let your servant find favour in your sight.’ Then the woman went to her quarters, ate and drank with her husband, and her countenance was sad no longer.

19 They rose early in the morning and worshipped before the Lord; then they went back to their house at Ramah. Elkanah knew his wife Hannah, and the Lordremembered her. 20 In due time Hannah conceived and bore a son. She named him Samuel, for she said, ‘I have asked him of the Lord.’

1 The Lord is my light and my salvation;
whom then shall I fear? *
the Lord is the strength of my life;
of whom then shall I be afraid?
2 When evildoers came upon me to eat up my flesh, *
it was they, my foes and my adversaries, who
stumbled and fell.
3 Though an army should encamp against me, *
yet my heart shall not be afraid;
4 And though war should rise up against me, *
yet will I put my trust in him.
5 One thing have I asked of the Lord;
one thing I seek; *
that I may dwell in the house of the Lord all the days
of my life;
6 To behold the fair beauty of the Lord *
and to seek him in his temple.
7 For in the day of trouble he shall keep me safe
in his shelter; *
he shall hide me in the secrecy of his dwelling
and set me high upon a rock.
8 Even now he lifts up my head *
above my enemies round about me.
9 Therefore I will offer in his dwelling an oblation
with sounds of great gladness; *
I will sing and make music to the Lord.
10 Hearken to my voice, O Lord, when I call; *
have mercy on me and answer me.
11 You speak in my heart and say, “Seek my face.” *
Your face, Lord, will I seek.
12 Hide not your face from me, *
nor turn away your servant in displeasure.
13 You have been my helper;
cast me not away; *
do not forsake me, O God of my salvation.
14 Though my father and my mother forsake me, *
the Lord will sustain me.
15 Show me your way, O Lord; *
lead me on a level path, because of my enemies.
16 Deliver me not into the hand of my adversaries, *
for false witnesses have risen up against me,
and also those who speak malice.
17 What if I had not believed
that I should see the goodness of the Lord *
in the land of the living!
18 O tarry and await the Lord’s pleasure;
be strong, and he shall comfort your heart; *
wait patiently for the Lord.

26 In the sixth month the angel Gabriel was sent by God to a town in Galilee called Nazareth, 27 to a virgin engaged to a man whose name was Joseph, of the house of David. The virgin’s name was Mary. 28 And he came to her and said, ‘Greetings, favoured one! The Lord is with you.’ 29 But she was much perplexed by his words and pondered what sort of greeting this might be. 30 The angel said to her, ‘Do not be afraid, Mary, for you have found favour with God. 31 And now, you will conceive in your womb and bear a son, and you will name him Jesus. 32 He will be great, and will be called the Son of the Most High, and the Lord God will give to him the throne of his ancestor David. 33 He will reign over the house of Jacob for ever, and of his kingdom there will be no end.’ 34 Mary said to the angel, ‘How can this be, since I am a virgin?’ 35 The angel said to her, ‘The Holy Spirit will come upon you, and the power of the Most High will overshadow you; therefore the child to be born will be holy; he will be called Son of God. 36 And now, your relative Elizabeth in her old age has also conceived a son; and this is the sixth month for her who was said to be barren. 37 For nothing will be impossible with God.’ 38 Then Mary said, ‘Here am I, the servant of the Lord; let it be with me according to your word.’ Then the angel departed from her.