Priscilla and Aquila, Coworkers of the Apostle Paul 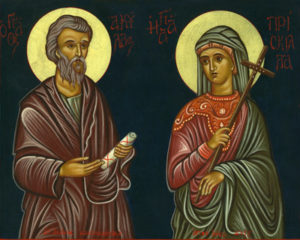 Rite I:
God of grace and might, who didst plenteously endow thy servants Priscilla and Aquila with gifts of zeal and eloquence to make known the truth of the Gospel: Raise up, we pray thee, in every country, heralds and evangelists of thy kingdom, that the world may know the immeasurable riches of our Savior Jesus Christ; who liveth and reigneth with thee and the Holy Ghost, one God, now and for ever. Amen.

Rite II:
God of grace and might, who gave to your servants Aquila and Priscilla gifts of zeal and eloquence to make known the truth of the Gospel: Raise up, we pray, in every country, heralds and evangelists of your kingdom, so that the world may know the immeasurable riches of our Savior Jesus Christ; who lives and reigns with you and the Holy Spirit, one God, now and for ever. Amen.

1 After this Paul left Athens and went to Corinth. 2 There he found a Jew named Aquila, a native of Pontus, who had recently come from Italy with his wife Priscilla, because Claudius had ordered all Jews to leave Rome. Paul went to see them, 3 and, because he was of the same trade, he stayed with them, and they worked together—by trade they were tentmakers. 4 Every sabbath he would argue in the synagogue and would try to convince Jews and Greeks.

18 After staying there for a considerable time, Paul said farewell to the believers and sailed for Syria, accompanied by Priscilla and Aquila. At Cenchreae he had his hair cut, for he was under a vow. 19 When they reached Ephesus, he left them there, but first he himself went into the synagogue and had a discussion with the Jews. 20 When they asked him to stay longer, he declined; 21 but on taking leave of them, he said, ‘I will return to you, if God wills.’ Then he set sail from Ephesus.

24 Now there came to Ephesus a Jew named Apollos, a native of Alexandria. He was an eloquent man, well-versed in the scriptures. 25 He had been instructed in the Way of the Lord; and he spoke with burning enthusiasm and taught accurately the things concerning Jesus, though he knew only the baptism of John. 26 He began to speak boldly in the synagogue; but when Priscilla and Aquila heard him, they took him aside and explained the Way of God to him more accurately. 27 And when he wished to cross over to Achaia, the believers encouraged him and wrote to the disciples to welcome him. On his arrival he greatly helped those who through grace had become believers, 28 for he powerfully refuted the Jews in public, showing by the scriptures that the Messiah is Jesus.

33 Teach me, O Lord, the way of your statutes, *
and I shall keep it to the end.
34 Give me understanding, and I shall keep your law; *
I shall keep it with all my heart.
35 Make me go in the path of your commandments, *
for that is my desire.
36 Incline my heart to your decrees *
and not to unjust gain.
37 Turn my eyes from watching what is worthless; *
give me life in your ways.
38 Fulfill your promise to your servant, *
which you make to those who fear you.
39 Turn away the reproach which I dread, *
because your judgments are good.
40 Behold, I long for your commandments; *
in your righteousness preserve my life.

28As they came near the village to which they were going, he walked ahead as if he were going on. 29But they urged him strongly, saying, ‘Stay with us, because it is almost evening and the day is now nearly over.’ So he went in to stay with them. 30When he was at the table with them, he took bread, blessed and broke it, and gave it to them. 31Then their eyes were opened, and they recognized him; and he vanished from their sight. 32They said to each other, ‘Were not our hearts burning within us while he was talking to us on the road, while he was opening the scriptures to us?’ 33That same hour they got up and returned to Jerusalem; and they found the eleven and their companions gathered together. 34They were saying, ‘The Lord has risen indeed, and he has appeared to Simon!’ 35Then they told what had happened on the road, and how he had been made known to them in the breaking of the bread.