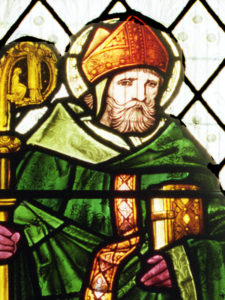 Rite I:
O God, our heavenly Father, who didst raise up thy faithful servant Robert Grosseteste to be a bishop and pastor in thy church and to feed thy flock: Give abundantly to all pastors the gifts of thy Holy Ghost, that they may minister in thy household as true servants of Christ and stewards of thy divine mysteries; through the same Jesus Christ our Lord, who liveth and reigneth with thee and the Holy Ghost, one God, for ever and ever. Amen.

Rite II:
O God, our heavenly Father, who raised up your faithful servant Robert Grosseteste to be a bishop and pastor in your church and to feed your flock: Give abundantly to all pastors the gifts of your Holy Spirit, that they may minister in your household as true servants of Christ and stewards of your divine mysteries; through Jesus Christ our Lord, who lives and reigns with you and the Holy Spirit, one God, for ever and ever. Amen.

1 It pleased Darius to set over the kingdom one hundred and twenty satraps, stationed throughout the whole kingdom, 2 and over them three presidents, including Daniel; to these the satraps gave account, so that the king might suffer no loss. 3 Soon Daniel distinguished himself above all the other presidents and satraps because an excellent spirit was in him, and the king planned to appoint him over the whole kingdom. 4 So the presidents and the satraps tried to find grounds for complaint against Daniel in connection with the kingdom. But they could find no grounds for complaint or any corruption, because he was faithful, and no negligence or corruption could be found in him. 5 The men said, ‘We shall not find any ground for complaint against this Daniel unless we find it in connection with the law of his God.’

6 So the presidents and satraps conspired and came to the king and said to him, ‘O King Darius, live for ever! 7 All the presidents of the kingdom, the prefects and the satraps, the counsellors and the governors, are agreed that the king should establish an ordinance and enforce an interdict, that whoever prays to anyone, divine or human, for thirty days, except to you, O king, shall be thrown into a den of lions. 8 Now, O king, establish the interdict and sign the document, so that it cannot be changed, according to the law of the Medes and the Persians, which cannot be revoked.’ 9 Therefore King Darius signed the document and interdict.

10 Although Daniel knew that the document had been signed, he continued to go to his house, which had windows in its upper room open towards Jerusalem, and to get down on his knees three times a day to pray to his God and praise him, just as he had done previously. 11 The conspirators came and found Daniel praying and seeking mercy before his God. 12 Then they approached the king and said concerning the interdict, ‘O king! Did you not sign an interdict, that anyone who prays to anyone, divine or human, within thirty days except to you, O king, shall be thrown into a den of lions?’ The king answered, ‘The thing stands fast, according to the law of the Medes and Persians, which cannot be revoked.’ 13 Then they responded to the king, ‘Daniel, one of the exiles from Judah, pays no attention to you, O king, or to the interdict you have signed, but he is saying his prayers three times a day.’

14 When the king heard the charge, he was very much distressed. He was determined to save Daniel, and until the sun went down he made every effort to rescue him. 15 Then the conspirators came to the king and said to him, ‘Know, O king, that it is a law of the Medes and Persians that no interdict or ordinance that the king establishes can be changed.’

16 Then the king gave the command, and Daniel was brought and thrown into the den of lions. The king said to Daniel, ‘May your God, whom you faithfully serve, deliver you!’ 17 A stone was brought and laid on the mouth of the den, and the king sealed it with his own signet and with the signet of his lords, so that nothing might be changed concerning Daniel. 18 Then the king went to his palace and spent the night fasting; no food was brought to him, and sleep fled from him.

19 Then, at break of day, the king got up and hurried to the den of lions. 20 When he came near the den where Daniel was, he cried out anxiously to Daniel, ‘O Daniel, servant of the living God, has your God whom you faithfully serve been able to deliver you from the lions?’ 21 Daniel then said to the king, ‘O king, live for ever! 22 My God sent his angel and shut the lions’ mouths so that they would not hurt me, because I was found blameless before him; and also before you, O king, I have done no wrong.’ 23 Then the king was exceedingly glad and commanded that Daniel be taken up out of the den. So Daniel was taken up out of the den, and no kind of harm was found on him, because he had trusted in his God.

1 Hallelujah!
Happy are they who fear the Lord *
and have great delight in his commandments!
2 Their descendants will be mighty in the land; *
the generation of the upright will be blessed.
3 Wealth and riches will be in their house, *
and their righteousness will last for ever.
4 Light shines in the darkness for the upright; *
the righteous are merciful and full of compassion.
5 It is good for them to be generous in lending *
and to manage their affairs with justice.
6 For they will never be shaken; *
the righteous will be kept in everlasting remembrance.
7 They will not be afraid of any evil rumors; *
their heart is right;
they put their trust in the Lord.
8 Their heart is established and will not shrink, *
until they see their desire upon their enemies.
9 They have given freely to the poor, *
and their righteousness stands fast for ever;
they will hold up their head with honor.

10 ‘Whoever is faithful in a very little is faithful also in much; and whoever is dishonest in a very little is dishonest also in much. 11If then you have not been faithful with the dishonest wealth, who will entrust to you the true riches? 12And if you have not been faithful with what belongs to another, who will give you what is your own? 13No slave can serve two masters; for a slave will either hate the one and love the other, or be devoted to the one and despise the other. You cannot serve God and wealth.’

14 The Pharisees, who were lovers of money, heard all this, and they ridiculed him. 15So he said to them, ‘You are those who justify yourselves in the sight of others; but God knows your hearts; for what is prized by human beings is an abomination in the sight of God.