Saint James of Jerusalem: Brother of Our Lord Jesus Christ, and Martyr, c. 62 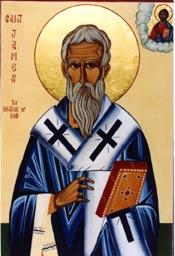 Rite I:
Grant, we beseech thee, O God, that after the example of thy servant James the Just, brother of our Lord, thy Church may give itself continually to prayer and to the reconciliation of all who are at variance and enmity; through the same our Lord Jesus Christ, who liveth and reigneth with thee and the Holy Spirit, one God, now and for ever. Amen.

Rite II:
Grant, O God, that, following the example of your servant James the Just, brother of our Lord, your Church may give itself continually to prayer and to the reconciliation of all who are at variance and enmity; through Jesus Christ our Lord, who lives and reigns with you and the Holy Spirit, one God, now and for ever. Amen.

12The whole assembly kept silence, and listened to Barnabas and Paul as they told of all the signs and wonders that God had done through them among the Gentiles. 13After they finished speaking, James replied, “My brothers, listen to me. 14Simeon has related how God first looked favorably on the Gentiles, to take from among them a people for his name. 15This agrees with the words of the prophets, as it is written,16‘After this I will return, and I will rebuild the dwelling of David, which has fallen; from its ruins I will rebuild it, and I will set it up, 17so that all other peoples may seek the Lord— even all the Gentiles over whom my name has been called. Thus says the Lord, who has been making these things 18known from long ago.’ 19Therefore I have reached the decision that we should not trouble those Gentiles who are turning to God, 20but we should write to them to abstain only from things polluted by idols and from fornication and from whatever has been strangled and from blood.21For in every city, for generations past, Moses has had those who proclaim him, for he has been read aloud every sabbath in the synagogues.”

22Then the apostles and the elders, with the consent of the whole church, decided to choose men from among their members and to send them to Antioch with Paul and Barnabas.

1 Happy are they who have not walked in the counsel of the wicked, *
nor lingered in the way of sinners,
nor sat in the seats of the scornful!
2 Their delight is in the law of the Lord, *
and they meditate on his law day and night.
3 They are like trees planted by streams of water,
bearing fruit in due season, with leaves that do not wither; *
everything they do shall prosper.
4 It is not so with the wicked; *
they are like chaff which the wind blows away.
5 Therefore the wicked shall not stand upright when judgment comes, *
nor the sinner in the council of the righteous.
6 For the Lord knows the way of the righteous, *
but the way of the wicked is doomed.

1Now I would remind you, brothers and sisters, of the good news that I proclaimed to you, which you in turn received, in which also you stand, 2through which also you are being saved, if you hold firmly to the message that I proclaimed to you—unless you have come to believe in vain. 3For I handed on to you as of first importance what I in turn had received: that Christ died for our sins in accordance with the scriptures,4and that he was buried, and that he was raised on the third day in accordance with the scriptures, 5and that he appeared to Cephas, then to the twelve. 6Then he appeared to more than five hundred brothers and sisters at one time, most of whom are still alive, though some have died.7Then he appeared to James, then to all the apostles. 8Last of all, as to one untimely born, he appeared also to me. 9For I am the least of the apostles, unfit to be called an apostle, because I persecuted the church of God. 10But by the grace of God I am what I am, and his grace toward me has not been in vain. On the contrary, I worked harder than any of them—though it was not I, but the grace of God that is with me. 11Whether then it was I or they, so we proclaim and so you have come to believe.

54He came to his hometown and began to teach the people in their synagogue, so that they were astounded and said, “Where did this man get this wisdom and these deeds of power? 55Is not this the carpenter’s son? Is not his mother called Mary? And are not his brothers James and Joseph and Simon and Judas? 56And are not all his sisters with us? Where then did this man get all this?” 57And they took offense at him. But Jesus said to them, “Prophets are not without honor except in their own country and in their own house.” 58And he did not do many deeds of power there, because of their unbelief.