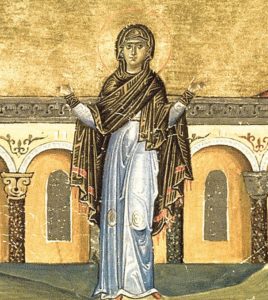 Rite I:
Fix our hearts on thee, O God, in pure devotion, that aided by the example of thy servants Sarah, Theodora, and Syncletica, the vain pursuits of this world may have no hold upon us, and that by the consuming fire of thy Spirit, we may be changed into the image and likeness of thy Son, Jesus Christ our Lord; to whom with thee and the same Spirit be all honor and glory, world without end. Amen.

Rite II:
Fix our hearts on You, O God, in pure devotion, that aided by the example of your servants Sarah, Theodora, and Syncletica, the vain pursuits of this world may have no hold upon us, and that by the consuming fire of your Spirit, we may be changed into the image and likeness of your Son, Jesus Christ our Lord; to whom with you and the same Spirit be all honor and glory, now and for ever. Amen.

1 Wisdom has built her house,
she has hewn her seven pillars.
2 She has slaughtered her animals, she has mixed her wine,
she has also set her table.
3 She has sent out her servant-girls, she calls
from the highest places in the town,
4 ‘You that are simple, turn in here!’
To those without sense she says,
5 ‘Come, eat of my bread
and drink of the wine I have mixed.
6 Lay aside immaturity, and live,
and walk in the way of insight.’

65 O Lord, you have dealt graciously with your servant, *
according to your word.
66 Teach me discernment and knowledge, *
for I have believed in your commandments.
67 Before I was afflicted I went astray, *
but now I keep your word.
68 You are good and you bring forth good; *
instruct me in your statutes.
69 The proud have smeared me with lies, *
but I will keep your commandments with my whole heart.
70 Their heart is gross and fat, *
but my delight is in your law.
71 It is good for me that I have been afflicted, *
that I might learn your statutes.
72 The law of your mouth is dearer to me *
than thousands in gold and silver.

18Some Sadducees, who say there is no resurrection, came to him and asked him a question, saying, 19‘Teacher, Moses wrote for us that if a man’s brother dies, leaving a wife but no child, the man shall marry the widow and raise up children for his brother. 20There were seven brothers; the first married and, when he died, left no children; 21and the second married her and died, leaving no children; and the third likewise; 22none of the seven left children. Last of all the woman herself died. 23In the resurrection whose wife will she be? For the seven had married her.’

24Jesus said to them, ‘Is not this the reason you are wrong, that you know neither the scriptures nor the power of God? 25For when they rise from the dead, they neither marry nor are given in marriage, but are like angels in heaven. 26And as for the dead being raised, have you not read in the book of Moses, in the story about the bush, how God said to him, “I am the God of Abraham, the God of Isaac, and the God of Jacob”? 27He is God not of the dead, but of the living; you are quite wrong.’