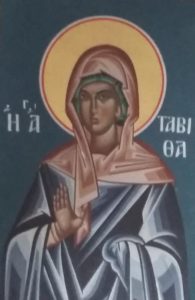 Rite I:
Most Holy God, who didst raise from the dead thy servant Tabitha to display thy power and confirm that thy Son is Lord; Grant unto us thy grace, that, aided by her prayers and example, we may be given a new life in thee, to do works pleasing in thy sight; through Jesus Christ thy Son our Lord; who liveth and reigneth with thee, in the unity of the Holy Ghost, one God, for ever and ever. Amen.

Rite II:
Most Holy God, who did raise from the dead your servant Tabitha to display your power and confirm that your Son is Lord; Grant unto us your grace, that, aided by her prayers and example, we may be given a new life in you, to do works pleasing in your sight; through Jesus Christ your Son our Lord; who lives and reigns with you, in the unity of the Holy Spirit, one God, for ever and ever. Amen.

36 Now in Joppa there was a disciple whose name was Tabitha, which in Greek is Dorcas. She was devoted to good works and acts of charity. 37 At that time she became ill and died. When they had washed her, they laid her in a room upstairs. 38 Since Lydda was near Joppa, the disciples, who heard that Peter was there, sent two men to him with the request, ‘Please come to us without delay.’ 39 So Peter got up and went with them; and when he arrived, they took him to the room upstairs. All the widows stood beside him, weeping and showing tunics and other clothing that Dorcas had made while she was with them. 40 Peter put all of them outside, and then he knelt down and prayed. He turned to the body and said, ‘Tabitha, get up.’ Then she opened her eyes, and seeing Peter, she sat up. 41 He gave her his hand and helped her up. Then calling the saints and widows, he showed her to be alive. 42 This became known throughout Joppa, and many believed in the Lord.

1 Happy are they who have not walked in the counsel of
the wicked, *
nor lingered in the way of sinners,
nor sat in the seats of the scornful!
2 Their delight is in the law of the Lord, *
and they meditate on his law day and night.
3 They are like trees planted by streams of water,
bearing fruit in due season, with leaves that do not wither; *
everything they do shall prosper.
4 It is not so with the wicked; *
they are like chaff which the wind blows away.
5 Therefore the wicked shall not stand upright when
judgment comes, *
nor the sinner in the council of the righteous.
6 For the Lord knows the way of the righteous, *
but the way of the wicked is doomed.

1‘Then the kingdom of heaven will be like this. Ten bridesmaids took their lamps and went to meet the bridegroom. 2Five of them were foolish, and five were wise. 3When the foolish took their lamps, they took no oil with them; 4but the wise took flasks of oil with their lamps. 5As the bridegroom was delayed, all of them became drowsy and slept. 6But at midnight there was a shout, “Look! Here is the bridegroom! Come out to meet him.” 7Then all those bridesmaids got up and trimmed their lamps. 8The foolish said to the wise, “Give us some of your oil, for our lamps are going out.” 9But the wise replied, “No! there will not be enough for you and for us; you had better go to the dealers and buy some for yourselves.” 10And while they went to buy it, the bridegroom came, and those who were ready went with him into the wedding banquet; and the door was shut. 11Later the other bridesmaids came also, saying, “Lord, lord, open to us.” 12But he replied, “Truly I tell you, I do not know you.” 13Keep awake therefore, for you know neither the day nor the hour.