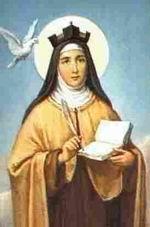 Rite I:
O God, who by the Holy Ghost didst move Teresa of Avila to manifest to thy church the way of perfection: Grant us, we beseech thee, to be nourished by her teaching, and enkindle within us a lively and unquenchable longing for true holiness; through Jesus Christ, the joy of loving hearts, who with thee and the Holy Ghost liveth and reigneth, one God, for ever and ever. Amen.

Rite II:
O God, who by your Holy Spirit moved Teresa of Avila to manifest to your church the way of perfection: Grant us, we pray, to be nourished by her teaching, and enkindle within us a keen and unquenchable longing for true holiness; through Jesus Christ, the joy of loving hearts, who with you and the Holy Spirit lives and reigns, one God, for ever and ever. Amen.

1Now the boy Samuel was ministering to the Lord under Eli. The word of the Lord was rare in those days; visions were not widespread.

10Now the Lord came and stood there, calling as before, ‘Samuel! Samuel!’ And Samuel said, ‘Speak, for your servant is listening.’ 11Then the Lord said to Samuel, ‘See, I am about to do something in Israel that will make both ears of anyone who hears of it tingle. 12On that day I will fulfil against Eli all that I have spoken concerning his house, from beginning to end. 13For I have told him that I am about to punish his house for ever, for the iniquity that he knew, because his sons were blaspheming God, and he did not restrain them. 14Therefore I swear to the house of Eli that the iniquity of Eli’s house shall not be expiated by sacrifice or offering for ever.’

15Samuel lay there until morning; then he opened the doors of the house of the Lord. Samuel was afraid to tell the vision to Eli. 16But Eli called Samuel and said, ‘Samuel, my son.’ He said, ‘Here I am.’ 17Eli said, ‘What was it that he told you? Do not hide it from me. May God do so to you and more also, if you hide anything from me of all that he told you.’ 18So Samuel told him everything and hid nothing from him. Then he said, ‘It is the Lord; let him do what seems good to him.’

1 As the deer longs for the water-brooks, *
so longs my soul for you, O God.
2 My soul is athirst for God, athirst for the living God; *
when shall I come to appear before the presence of God?
3 My tears have been my food day and night, *
while all day long they say to me,
“Where now is your God?”
4 I pour out my soul when I think on these things: *
how I went with the multitude and led them into the house of God,
5 With the voice of praise and thanksgiving, *
among those who keep holy-day.
6 Why are you so full of heaviness, O my soul? *
and why are you so disquieted within me?
7 Put your trust in God; *
for I will yet give thanks to him,
who is the help of my countenance, and my God.

35In the morning, while it was still very dark, he got up and went out to a deserted place, and there he prayed. 36And Simon and his companions hunted for him. 37When they found him, they said to him, ‘Everyone is searching for you.’ 38He answered, ‘Let us go on to the neighbouring towns, so that I may proclaim the message there also; for that is what I came out to do.’ 39And he went throughout Galilee, proclaiming the message in their synagogues and casting out demons.