Theodore of Tarsus, Archbishop of Canterbury, 690 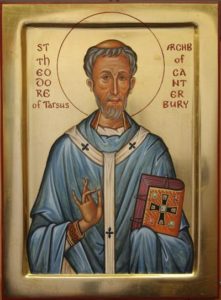 Rite I:
Almighty God, who didst give thy servant Theodore of Tarsus gifts of grace and wisdom to establish unity where there had been division and order where there had been chaos: Create in thy church, we pray thee, by the operation of the Holy Ghost, such godly union and concord that it may proclaim, both by word and example, the Gospel of the Prince of Peace; who liveth and reigneth with thee and the Holy Ghost, one God, for ever and ever. Amen.

Rite II:
Almighty God, who gave your servant Theodore of Tarsus gifts of grace and wisdom to establish unity where there had been division and order where there had been chaos: Create in your church, by the operation of the Holy Spirit, such godly union and concord that it may proclaim, both by word and example, the Gospel of the Prince of Peace; who lives and reigns with you and the Holy Spirit, one God, for ever and ever. Amen.

14What good is it, my brothers and sisters, if you say you have faith but do not have works? Can faith save you? 15If a brother or sister is naked and lacks daily food, 16and one of you says to them, ‘Go in peace; keep warm and eat your fill’, and yet you do not supply their bodily needs, what is the good of that? 17So faith by itself, if it has no works, is dead.

18But someone will say, ‘You have faith and I have works.’ Show me your faith without works, and I by my works will show you my faith. 19You believe that God is one; you do well. Even the demons believe—and shudder. 20Do you want to be shown, you senseless person, that faith without works is barren? 21Was not our ancestor Abraham justified by works when he offered his son Isaac on the altar? 22You see that faith was active along with his works, and faith was brought to completion by the works. 23Thus the scripture was fulfilled that says, ‘Abraham believed God, and it was reckoned to him as righteousness’, and he was called the friend of God. 24You see that a person is justified by works and not by faith alone. 25Likewise, was not Rahab the prostitute also justified by works when she welcomed the messengers and sent them out by another road? 26For just as the body without the spirit is dead, so faith without works is also dead.

9 Fear the Lord, you that are his saints, *
for those who fear him lack nothing.
10 The young lions lack and suffer hunger, *
but those who seek the Lord lack nothing that is good.
11 Come, children, and listen to me; *
I will teach you the fear of the Lord.
12 Who among you loves life *
and desires long life to enjoy prosperity?
13 Keep your tongue from evil-speaking *
and your lips from lying words.
14 Turn from evil and do good; *
seek peace and pursue it.

42Keep awake therefore, for you do not know on what day your Lord is coming. 43But understand this: if the owner of the house had known in what part of the night the thief was coming, he would have stayed awake and would not have let his house be broken into. 44Therefore you also must be ready, for the Son of Man is coming at an unexpected hour.

45 ‘Who then is the faithful and wise slave, whom his master has put in charge of his household, to give the other slaves their allowance of food at the proper time? 46Blessed is that slave whom his master will find at work when he arrives. 47Truly I tell you, he will put that one in charge of all his possessions.