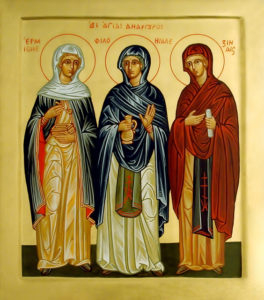 Rite I:
Merciful God, whose most dear Son came to heal the sick, raise the dead, cast out demons, and preach good news to the poor: Lead us by the example of thy servants, Zenaida, Philonella, and Hermione, to freely give even as we have freely received; through Jesus Christ our Lord. Amen.

Rite II:
Merciful God, whose most dear Son came to heal the sick, raise the dead, cast out demons, and preach good news to the poor: Lead us by the example of your servants, Zenaida, Philonella, and Hermione, to freely give even as we have freely received; through Jesus Christ our Lord. Amen.

1    Honour physicians for their services,
for the Lord created them;
2    for their gift of healing comes from the Most High,
and they are rewarded by the king.
3    The skill of physicians makes them distinguished,
and in the presence of the great they are admired.
4    The Lord created medicines out of the earth,
and the sensible will not despise them.
5    Was not water made sweet with a tree
in order that its power might be known?
6    And he gave skill to human beings
that he might be glorified in his marvellous works.
7    By them the physician heals and takes away pain;
8          the pharmacist makes a mixture from them.
God’s works will never be finished;
and from him health spreads over all the earth.

9    My child, when you are ill, do not delay,
but pray to the Lord, and he will heal you.
10   Give up your faults and direct your hands rightly,
and cleanse your heart from all sin.
11   Offer a sweet-smelling sacrifice, and a memorial portion of choice flour,
and pour oil on your offering, as much as you can afford.
12   Then give the physician his place, for the Lord created him;
do not let him leave you, for you need him.
13   There may come a time when recovery lies in the hands of physicians,
14          for they too pray to the Lord
that he will grant them success in diagnosis
and in healing, for the sake of preserving life.
15 He who sins against his Maker
will be defiant towards the physician.

1 Hallelujah!
How good it is to sing praises to our God! *
how pleasant it is to honor him with praise!
2 The Lord rebuilds Jerusalem; *
he gathers the exiles of Israel.
3 He heals the brokenhearted *
and binds up their wounds.
4 He counts the number of the stars *
and calls them all by their names.
5 Great is our Lord and mighty in power; *
there is no limit to his wisdom.
6 The Lord lifts up the lowly, *
but casts the wicked to the ground.
7 Sing to the Lord with thanksgiving; *
make music to our God upon the harp.
8 He covers the heavens with clouds *
and prepares rain for the earth;
9 He makes grass to grow upon the mountains *
and green plants to serve mankind.
10 He provides food for flocks and herds *
and for the young ravens when they cry.
11 He is not impressed by the might of a horse; *
he has no pleasure in the strength of a man;
12 But the Lord has pleasure in those who fear him, *
in those who await his gracious favor.
13 Worship the Lord, O Jerusalem; *
praise your God, O Zion;
14 For he has strengthened the bars of your gates; *
he has blessed your children within you.
15 He has established peace on your borders; *
he satisfies you with the finest wheat.
16 He sends out his command to the earth, *
and his word runs very swiftly.
17 He gives snow like wool; *
he scatters hoarfrost like ashes.
18 He scatters his hail like bread crumbs; *
who can stand against his cold?
19 He sends forth his word and melts them; *
he blows with his wind, and the waters flow.
20 He declares his word to Jacob, *
his statutes and his judgments to Israel.
21 He has not done so to any other nation; *
to them he has not revealed his judgments.
Hallelujah!

29 As soon as they left the synagogue, they entered the house of Simon and Andrew, with James and John. 30 Now Simon’s mother-in-law was in bed with a fever, and they told him about her at once. 31 He came and took her by the hand and lifted her up. Then the fever left her, and she began to serve them.

32 That evening, at sunset, they brought to him all who were sick or possessed with demons. 33 And the whole city was gathered around the door. 34 And he cured many who were sick with various diseases, and cast out many demons; and he would not permit the demons to speak, because they knew him.