St. Columba, the Abbot of Iona

Asiamerica Ministries
Today we commemorate St. Columba, the Abbot of Iona. He was a monk, an abbot and missionary credited to have spread the gospel in Ireland and Scotland. He founded several  monasteries, the most important being the abbey in Iona which became  a dominant religious and political institution for centuries. The patron saint of Derry, he is remembered today as one of the three chief saints of Ireland, along with Saint Patrick and St. Brigit.
Come to think of it, “St. Columba” was the topic of my very first homily as seminarian at St. Andrew’s Theological Seminary in the Philippines.The reason why I can’t forget was that I was called to the Dean’s Office right after that sermon and was not given another chance to preach in the chapel again.
In that homily, I spoke highly of Columba as an ascetic. At that time in the early ‘70’s, there were some faculty members in our seminary (as in the whole Philippines) who were chain-smokers and heavy drinkers and their examples were being emulated by seminarians. (Not anymore. I think SATS is now a non-smoking zone)
So after having defined an ascetic as “a person who dedicates his life to the pursuit of contemplative ideals and practices self-denial or self-mortification for religious reasons,” I added in a snide remark. I said, “St. Columba never smoked and was not fond of drinking alcohol—unlike some of our faculty members!”
There was a brief but deafening silence in the chapel and the amiable Dean Charles Clark, motioned me to follow him to his office. I was a rookie and a wet-in-the-ears preacher and learned a lesson or two on how not to offend your hearers…and not to pontificate on your professors—if you wish to receive a “faculty award,” which of course I did not get.
But on the other hand, I might have saved some from lung cancer and liver disease, if they followed my advice. But that’s another matter…
Columbarium
Another reason I can’t forget Columba is because of “columbarium,” a structure of vaults lined with recesses for cinerary urns holding the cremains of the dead.
Columbaria had been a fixture in many cemeteries and now also in many churches since cremation has become a popular alternative to burial. 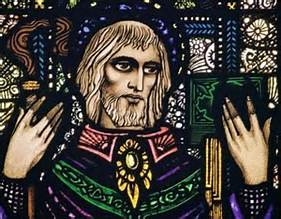 Columba which is the Latin (as well as Irish) word for “dove” and columbarium is derived from “dovecote,” a compartmentalized housing for doves and pigeons. Columba’s original name was Crimthan, meaning “Fox” and for some reason, change into “Dove.”
The name “Dove” speaks not only of his disciplined, abstemious and ascetic character but also of his life, a sinner saved by God’s grace and thereafter, a life lived in the power of the Holy Spirit—a far-cry from the meaning of “Fox.”
Born and raised in Ireland, Columba was a striking figure of great stature and powerful build, with a loud but melodious voice which could be heard from one hilltop to another. He used that gift to enhance his evangelistic and missionary skills which covered the multitude of his sins.
Tradition says that sometime around 560, Columba became involved in a quarrel with Saint Finnian of Movilla Abbey over apsalter. Interesting how ancient saints quarrel over a psalm as modern saints quarrel over a laptop.
Saint Finnian disputed his right to keep the copy that eventually led to the pitched in battle, during which many men belonging to each of their clans were killed.
The second grievance that led him to incite the clan Neill to rise and engage in battle against King Diarmait at Cooldrevny in 561 was the king’s violation of the right of sanctuary. Prince Curnan of Connaught, who happened to be Columba’s kinsman, had fatally injured a rival in a hurling match and had taken refuge with Columba, was dragged from his protector’s arms and slain by Diarmaid’s men, in defiance of the rights of sanctuary. Another battle ensued and again many men died.
A synod of clerics and scholars threatened to excommunicateColumba for these deaths, but St. Brendan of Birr spoke on his behalf, pleading that he be exiled instead. Columba was bothered but on advice from an aged hermit, Molaise, he pledged to expiate his offences by going into exile voluntarily and win for Christ as many souls equal or more in number as those that had perished in the battles he was involved in.
He left Ireland and traveled to Scotland with twelve companions in a wicker currach (Irish boat) covered with leather.
According to legend he first landed on the Kintyre Peninsula but he could still see Ireland (just as Sarah Palin could see Russia from Alaska, just joking) so he moved north to the west coast, where the island was given to him as his headquarters.
It was in Iona that his abbey was established to become the “mission center” where monks and missionaries would be trained, empowered and sent all over Scotland and Ireland.
Aside from the missionary and literacy services his abbey provided, his reputation as a “holy man” led to his role as a diplomat among the tribes. There are many stories of miracles which he performed during his work among the Scots and the Picts, the most famous (and outrageous) was his supposed to be victorious encounter with an unidentified animal that some equated with the “Lock Ness Monster!”
Aside from his physical prowess, Columba was a renowned man of letters, having written several hymns and having transcribed300 books.
Columba died in Iona and was buried in 597 by his monks in theabbey he founded. In 794 the Vikings descended on Iona. Columba’s relics were finally removed in 849 and divided between Scotland and Ireland.
Today St. Columba is venerated all over Christendom particularly in Ireland, Scotland and Canada which until 2011 has the largest ethnic group coming from Scottish ancestry.
The name “St. Columba” became attached to many Roman Catholic, Anglican, Episcopal, Presbyterian and even Orthodox churches worldwide. Not a bad legacy from the man whose name transformed from a “fox” to a “dove.”  Amen.