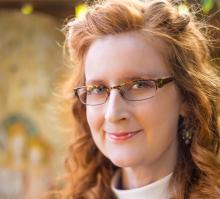 The Rev. Danae M. Ashley, MDiv, MA, LMFT is an Episcopal priest and marriage and family therapist who has ministered with parishes in North Carolina, New York, Minnesota, and serves as the Associate Rector at St. Andrew’s Episcopal Church, Seattle, and a therapist at Soul Spa Seattle. Danae uses art, music, drama, poetry, and movement in counseling, spiritual direction, and creation of ritual. Her interfaith Clergy Care Circles for therapeutic group spiritual direction directly supports diverse clergy in varied circumstances across the country. She is an alumna of Young Clergy Women International and is a member of Thank God for Sex – promoting healing for those who have shame about their bodies, sexuality, and faith. Danae is also one of the contributors of the book Still a Mother: Journeys through Perinatal Bereavement. Additionally, she produced the play Naming the Un-Named: Stories of Fertility Struggle with playwright Amanda Aikman; has written for Working Preacher: Craft of Preaching; and has been featured on several podcasts regarding fertility struggle and faith.

Danae’s favorite past times include hiking with her husband and beloved dog, reading, traveling, volunteering as a Master Gardener, dancing with wild abandon to Celtic music, and serious karaoke.

From September of 2003 through April of 2005, the television show Joan of Arcadia introduced viewers to a teenage girl named Joan, but with a twist: Joan’s character is loosely based on the life of the 15th-century saint, Joan of Arc. The overarching plot showed Joan Girardi as a modern 16-year old girl who is […]

In a church much like this one, a woman stays behind in the pews after the service. She is sitting at the back, off to the side, so no one notices her as they are tidying things up. Eventually, the priest comes back into the sanctuary to retrieve something and hears her crying. When the […]

“During the bombing raids of World War II, thousands of children were orphaned and left to starve. The fortunate ones were rescued and placed in refugee camps where they received food and good care. But many of these children who had lost so much could not sleep at night. They feared waking up to find […]

The days are getting shorter, the nights are getting colder, and the season after Pentecost is coming to a close. It is the longest season of the church year, marking the time by reminding us what it means to live as a disciple, be good stewards of what we have been given, and how to […]

The Scriptures this morning draw us to reflect on what it means to be community. We each have our own communities that we come here from on Sunday, but we are part of the larger community of the Christian faith—a community in which we can gather and from which we can gain wisdom, rejuvenation, and […]

There once was a wise communications professor who had her students engage in an observation exercise. She handed out a picture of an elderly man sitting on some front steps. A young woman stood to his right, looking down toward him, and a child stood in front, facing both of them. The professor asked the […]

One moonlit night a Fox was prowling about a farmer’s chicken coop, and saw a Hen roosting high up beyond his reach. “Good news, good news!” he cried. “Why, what is that?” said the Hen. “King Lion has declared a universal truce. No beast may hurt a bird henceforth, but all shall dwell together in […]

This season of the Sermons That Work podcast is sponsored by Church Pension Group, a financial services organization providing employee benefits, property and casualty insurance, and publishing to The Episcopal Church. Follow Church Pension Group on Facebook, Twitter, Instagram, YouTube and LinkedIn to learn how it’s been a stable presence in the Church for more than 100 years.