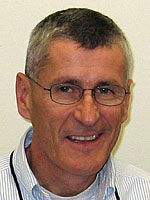 The Rev. Dr. Frank Hegedűs, a priest of the Episcopal Diocese of Los Angeles, is currently chaplain of Saint Margaret’s Anglican Church in Budapest, Hungary, and an area dean in the Church of England’s Diocese in Europe. Visit our Saint Margaret’s Facebook page at www.anglicanbudapest.com and like us. Isten hozott!

An Episcopal bishop who served many years ago in the upper Midwest of the United States used to love telling stories he had learned from the Native Americans of the area, many of whom were Episcopalians. Here is one of them. A wise man among the Indians – many Native Americans in the Midwest prefer […]

In many Christian communities, today’s worship begins with a procession around the church grounds and perhaps the neighborhood as well – an appealing way to witness to the faith this Sunday before Easter, to be sure. The event may even garner coverage on the evening news or in the local paper. Still, no matter how […]

“Be on your guard,” our Lord advises us in no uncertain terms in today’s reading from near the end of the Gospel of Luke. Odd advice, we might be tempted to think, at the beginning of yet another Advent season – a time when we are more inclined to anticipate the joy of the coming […]

In a recent National Public Radio report on contemporary family life in America, a somewhat exasperated young father describes parenthood as “always filled with joy, but sometimes not much fun.” Most parents today could probably relate to his words. For being father or mother, with all its wonder and joys, is not easy in any […]

Any halfway decent real-estate agent or commercial property manager could probably explain today’s gospel parable from Matthew in two seconds flat. It is all about landlords and tenants after all. And there is an entire body of business law devoted to them and their all-too-numerous disputes. In Jesus’ telling, a vineyard owner contracts with tenants […]

Were the Magi real? Did they actually make their way from a distant land in the East some 2,000 years ago, following a mysterious star all the way to Bethlehem? And did they really bring the Child Jesus those gifts of gold, frankincense and myrrh? Good questions. Every year around this time of course, astronomers, […]

Every few years or so, it seems, a high-ranking ecclesiastic or cleric somewhere in the Christian world gets into hot water for appearing to deny the reality of the Resurrection. The hapless theologian’s name is in the papers and all over the blogosphere, and devout members of the church everywhere are scandalized. There is even […]

In the preface to his 1522 translation of the New Testament, Martin Luther famously refers to the Letter of James – from which our second reading today is taken – as a “straw-letter,” or an “Epistle of Straw,” as it is more often called. What he meant by this comment has been the subject of […]

I Give You a New Commandment, That You Love One Another, Maundy Thursday – 2012

Today is Maundy Thursday, the last Thursday of our annual Lenten observance. The word “Maundy” does not have any meaning in and of itself. It is one of those exotic Episcopal or Anglican terms we sooner or later all become familiar with in our church. Scholars are not even sure of the word’s origin, though […]

Much has been made in the popular press in recent years of so-called “helicopter parents.” Never heard of them? Well, they of course have nothing to do with flying machines. The term refers instead to parents who seem to “hover” over their children constantly, making many of life’s decisions for them – sometimes giving them […]