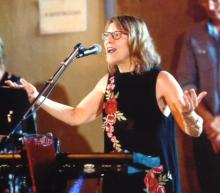 Trouble and distress have come upon me, yet your commandments are my delight. The righteousness of your decrees is everlasting; grant me understanding, that I may live. Amen. Today’s scripture lessons present a unified whole, in lovely, surprising connections. The prophet Habakkuk is notable because he questions God. He asks, “O Lord, how long shall I […]

Light has sprung up for the righteous, and joyful gladness for those who are truehearted! Rejoice in the Lord, you righteous, and give thanks to God’s holy name! (Psalm 97) Christmas Day in our churches has a different kind of light than Christmas Eve. Christmas Eve is all stars and brightness, angels and adoration and […]

2 Kings 2:1-12 There are two stories in this beautiful passage from Second Kings. One is the dramatic story of Elijah’s ascent to heaven, rich with imagery of God in the whirlwind, of chariots of fire and waters parting. It is a tale of prophets that connects Elijah with Moses and precipitates speculation about the […]

Isaiah 40:21-31 This passage is from Second Isaiah, written toward the end of the Babylonian exile. The prophet promises the people of Israel that deliverance from exile in Babylon is coming soon. The message is of consolation and the greatness of God the king and creator, a powerful God who is in control of history […]

Jonah 3:1-5, 10 The Hebrew prophet Jonah has been sent by God to foretell the destruction of the city of Nineveh. Jonah is reluctant, and tries to escape God’s call. He boards a ship headed in the opposite direction; God sends a storm; the sailors throw Jonah overboard into the sea where he is swallowed […]

1 Samuel 3:1-10 (11-20) This first half of this Sunday’s passage, the story of God’s call to Samuel, is often left to stand alone. It is made even deeper and more meaningful when read in conjunction with the second half, in which God speaks concerning the punishment of the house of Eli. Eli was the […]

Isaiah 61:1-4, 8-11 In this passage from Third Isaiah, the exiles have returned from Babylon. Their task is to rebuild the city: to create a new Jerusalem. The theme is transformation. The messianic overtones and gospel message are unmistakable on this third Sunday of Advent as we rejoice in the expectation of God entering the […]

Exodus 17:1-7 In this passage, the Israelites seem to be ungrateful to both God and to Moses for delivering them from slavery in Egypt. However, they are not mere petulant, complaining whiners. Lack of water in the Sinai Desert is no joke. They are in dire straits. It is interesting that it is Moses who […]

Acts 2:14a, 36-41 This passage, which appears in Acts 2 after the people in Jerusalem have witnessed the manifestation of the Holy Spirit in the speaking of many languages, is the beginning of Peter’s teaching on Pentecost. Peter has explained that scripture, properly understood, foretells that Jesus is the Messiah, whom God has raised from […]

[NOTE TO READER: Ehyeh asher Ehyeh is pronounced “EH-hyah ah-SHARE EH-hyah”] “God forbid it, Lord! This must never happen to you.” These words from today’s reading from Matthew are Peter’s impulsive response to the devastating news that Jesus – his friend, healer and teacher, beloved and more than beloved, his divine Lord and savior – would suffer. […]