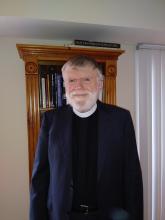 Letâs turn our attention to one of the minor characters in the Passion story. He remains speechless, and appears in only one verse. Yet this character is one of the closest to Jesus as Jesus walks the road to the place of crucifixion. Here is the single verse that mentions this character: On their way […]

Today may we consider what it means to find springtime in December. In the name of God: Father, Son, and Holy Spirit. In many parts of the country, late fall weather can be surprising. In fact, it can seem like spring. Temperatures can be unseasonably mild and people can even walk around in their shirtsleeves […]

Before the collapse of the Soviet Union, the Russian author Alexander Solzhenitsyn spent many years in the prison camps of Siberia. Along with other prisoners, he worked in the fields day after day, in rain and sun, during summer and winter. His life appeared to be nothing more than backbreaking labor and slow starvation. The […]

Today we find ourselves at a midway point in our travel through the Christian Year. Since Advent, our focus has been largely on major events in the story of Jesus: his coming and manifestation, his suffering and triumph, and his gift of the Spirit. Until Advent comes again, our focus will be largely on what […]

He rose out of obscurity and made a tremendous impact on his nation. Crowds of people gathered wherever he was, fascinated by him. The authorities felt threatened; it seemed like all the old ways were up for grabs. Families quarreled over what he did. Those devoted to him sensed that a new era had begun. […]

It’s what people call “the good life” — a steady job, a comfortable home, loving friends and family. Moses has it all once he settles down in Midian. The years go by. Moses seems content with small pleasures and accomplishments. He never talks about his past or dreams about his future. He lacks any true […]

Where should we look to see the magi, the wise men, the Gentiles of today, the people perhaps different from us who are following the star to Jesus? May we consider this question with open hearts. In the name of God: Father, Son, and Holy Spirit. Today’s Gospel presents an epiphany. Epiphany comes from a […]

Let’s consider a picture appropriate to this day, the feast of all the saints. In the name of God: Father, Son, and Holy Spirit. One feature of modern weddings are wedding photographs. In many churches, after the wedding service is complete, and the man and the woman are now husband and wife, and the congregation […]

Today let’s consider some of the hard sayings of Jesus, and where their real challenge lies. In the name of the Father, the Son, and the Holy Spirit. Ask a hundred people to identify their favorite Bible passage and it’s likely not one of them will mention these verses we have just heard from the […]

Sometimes when we hear the Bible in our own language, it’s helpful to translate it yet again into our time and place. Let’s do that today. In the name of the Father, Son, and Holy Spirit. The conversation we heard about in the Gospel that was just read with its references to religious hand washing […]

On this day, the people of our land all dream the same dream. From one end of the nation to the other, in the cities and in the suburbs, in the towns and on the farms, we dream a common dream. The dream reveals the best that is in us as a people. It shows […]

Among the most powerful forces we experience in life are expectations. Some expectations come from other people. Parents, spouses, peers, bosses, friends, children, neighbors, customers, and plenty of others all have their expectations of us. They expect certain things regarding our speech, our behavior, our character. Often, the most influential expectations are the ones that […]